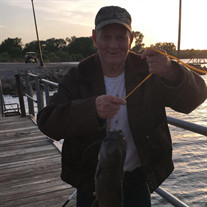 Albert "Wayne" Hamersley, 91, Eldorado, was called home Monday, June 10, 2019 at Hardeman County Memorial Hospital in Quanah, Texas. Graveside services have been scheduled for 10:00 AM Saturday June 15, 2019 at the Eldorado Cemetery under the direction of Kincannon Funeral Home and Cremation Service. Wayne was born December 31, 1927 to Charlie and Ada (Sparks) Hamersley in Crowell, Texas. He served his country in the United States Army in World War II and Korean War . Following his discharge from the Army he began a career as a custom harvester and cotton ginner. Wayne enjoyed fishing, spending time outdoors, and telling stories. Wayne loved his family and being surrounded by them. For the last year and a half of his life Wayne lived with his great niece, Gayla, and her two daughters, Zaylie and Presley. He was especially close to those two girls, he enjoyed entertaining, singing to and teaching them how to do front flips off the trampoline into the pool. Wayne loved the Lord and was a member of the Eldorado Church of Christ. He is preceded in death by his parents Charlie and Ada Hamersley; daughter, Christy Hamersley; granddaughter, Sarah Hamersley; four sisters, Ellen Speth, Mary Brake, Josie Medlock, and Mildred Chumley; and two brothers, Willie and Walter Hamersley. Wayne is survived by his sons, Clint Hamersley, Charles Wayne Hamersley, Curtis Jenkins and Hurshal Ellison; Linda Kopish, nine grandchildren and seven great-grandchildren The Hamersley family will greet friends from 6:00 to 8:00 PM, Friday evening at the Eldorado Kincannon Chapel. Online tributes may be made at kincannonfuneralhome.com

The family of Albert Wayne Hamersley created this Life Tributes page to make it easy to share your memories.

Send flowers to the Hamersley family.