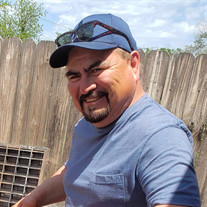 Alfredo Garcia Montiel, 54, passed away June 9, 2019, in Chickasha, OK. Funeral services have been scheduled for 2:00 PM, Friday, June 14, 2019 at the Kincannon Memorial Chapel. Burial will follow in the Quanah Cemetery under the direction of Kincannon Funeral Home and Cremation Service. Alfredo was born December 18, 1964 to Isabel and Catalina (Garcia) Montiel in Mexico. Alfredo and Olga Ortiz were united in marriage in 1988 in Vernon, Texas. He was the owner of Montiel Imports in Altus for five years. He was currently working for Patterson Drilling Company. Alfredo was in the oil drilling profession for twenty seven years. He enjoyed yardwork, cooking out with his family and traveling. His greatest treasure was his family. He is preceded in death by his parents; daughter, Michelle Gunhammer and brother, Miguel Garcia. Alfredo is survived by wife Olga, of the home; daughters, Misty Heard, Marcia Briones and husband Chris, Melanie Gunhammer, Marissa Montiel, and special angel, Presley; grandchildren, Brandon, Candyce, Harlee, Noah, Haley, David, Addi and Lauren; great-grandchildren, Westley, Sam, Lainey, Hadley, JoJo, Bentley and Berkley. He is also survived by his brothers, Javier, Antonio, Gaby, Lino, and Carlos; sisters, Rosa, Mona, Graciela and Isabel; as well as a host of other nieces and nephews. The Montiel family will greet friends from 6 to 8 PM, Thursday evening in the Kincannon Gathering Room. Family and friends unable to attend may log on to kincannonfuneralhome.com, 30 minutes prior to the service, to view the live webcast of the funeral. Online tributes may be made at kincannonfuneralhome.com

Alfredo Garcia Montiel, 54, passed away June 9, 2019, in Chickasha, OK. Funeral services have been scheduled for 2:00 PM, Friday, June 14, 2019 at the Kincannon Memorial Chapel. Burial will follow in the Quanah Cemetery under the direction... View Obituary & Service Information

The family of Alfredo Garcia Montiel created this Life Tributes page to make it easy to share your memories.

Send flowers to the Montiel family.