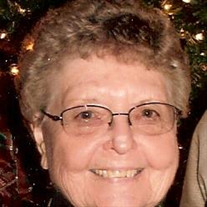 Almeta Stowe, Blair, passed away June 27, 2019. Graveside services have been scheduled for 10:00 AM, Monday, July 1, 2019 at the Warren Cemetery with Dr. Jeff Moore officiating. Services have been entrusted to Kincannon Funeral Home and Cremation Service. Darlene Almeta Wheeler was born October 29, 1929 to Ora J. and Mary Edith (Newton) Wheeler in Lone Wolf, Oklahoma. She grew up in the Lone Wolf area, where she went to school and lived down the road from the love of her life, Fred Stowe. Almeta and Fred Stowe were united in marriage on September 16, 1949 in Hobart, Oklahoma. They had two daughters, Terri and Lisa. In the early years of their marriage they lived in Mangum, Oklahoma where Almeta was a telephone operator for Southwestern Bell. After Terri was born she became a stay at home mom. Almeta and Fred moved to several different locations while he was climbing utility poles for B Line Construction Company. The family eventually settled in the Warren community where she and Fred worked their farm and spent the rest of their lives. Almeta was a devoted mother, wife, hard working farm wife and an excellent cook. She was a member of the Warren Church of Christ and loved her husband, children, grandchildren and great grandchildren more than anything. Almeta is preceded in death by her parents; husband, Fred and daughter, Terri. She leaves behind a daughter, Lisa Petzold and husband Corwin, of Elmer, OK; grandchildren, Tyler Gill, of Norman; Tara Gill, of Lawton; and Seth Petzold of Elmer; great grandchildren, Terrin Gill and Tymrie Gill, both of Lawton; son-in-law Tim Gill, of Lawton; sister, Verna Standerfer of Yukon; brother, Darris Wheeler and wife, Natalie of Altus and several nieces, nephews and friends. She also leaves her very special caregivers Linda Smith and Jimmy Wright. The Stowe family will greet friends from 2:00 until 3:00 p.m. Sunday, June 30, 2019 at the Kincannon Gathering Room.

Almeta Stowe, Blair, passed away June 27, 2019. Graveside services have been scheduled for 10:00 AM, Monday, July 1, 2019 at the Warren Cemetery with Dr. Jeff Moore officiating. Services have been entrusted to Kincannon Funeral Home and... View Obituary & Service Information

The family of Almeta Stowe created this Life Tributes page to make it easy to share your memories.

Send flowers to the Stowe family.