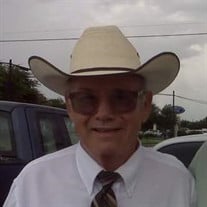 Arlis Bryan Moon, Sr., 81, Corsicana, Texas, passed away on Saturday, May 5, 2018 at his home. Funeral services will be 10:00 AM Thursday, May 10, 2018 at the Freedom Church with Arlis B. Moon, Jr. officiating. Burial will follow in the Hess Cemetery under the direction of the Kincannon Funeral Home and Cremation Service. Arlis was born on February 7, 1937 in Three Rivers, Texas to James M. and Geneva G. (Armstrong) Moon, Sr. He graduated from Harlandale High School and attended San Antonio College. Arlis was credentialed as an Assembly of God pastor in 1957. He pastored in Lighthouse, Pearsall and Stamford Assemblies of God in Texas and started the Southside Assembly of God in San Antonio. Arlis also pastored the Yale, Oklahoma Assembly of God and the First Pentecostal Holiness in Cushing, Oklahoma. He pastored and preached for over 40 years and never stopped ministering. Arlis married Eulonda Faye (Beavers) Stufflebeam on August 11, 1984 in Cushing, Oklahoma. He attended Freedom Church and was a singer, philosopher and "generous to a fault." He was a rancher at heart and loved his Old West lifestyle home. He was a master craftsman and millright and loved raising his horses, goats and Red Angus bulls and longhorns. Arlis was also a patriot, even though he never served, he loved his country very much. He was an avid Dallas Cowboys fan. His parents, a daughter, Lorrie Moon, and five siblings, Jesse, Bobby, Virgil and Eula Moon, and Janelle Hargrave, preceded him in death. Survivors include his wife, Eulonda Faye Moon, of the home; five children, Cheryl V. Swafford and husband, Steve, Karen Moon Starr and husband, Glen, Arlis B. Moon, Jr. and wife, Elizabeth, Michael K. Moon and wife, Alice, and Susan E. Weicht and husband, William; a stepson, Leslie Stufflebeam and wife, June; the mother of his children, Irene E. Long; 19 grandchildren, Austin, Amaris, Chelsea, Holly, Jennifer, Arlis, III, Matlock, Lacy, Nicole, James, JohnMarc, Jesse, Joanna, Leticia, Kevin, Kim, Susanna, Gretchen and Grace; 24 great grandchildren with one on the way; three brothers, James Moon, Jr., Jerry Moon and Doy Wayne Moon; a sister, Kathy Vidales; and many other family members and friends. The family will receive friends from 6:00 - 8:00 PM Wednesday at the funeral home. Online tributes may be made at kincannonfuneralhome.com

Arlis Bryan Moon, Sr., 81, Corsicana, Texas, passed away on Saturday, May 5, 2018 at his home. Funeral services will be 10:00 AM Thursday, May 10, 2018 at the Freedom Church with Arlis B. Moon, Jr. officiating. Burial will follow in the Hess... View Obituary & Service Information

The family of Arlis Bryan Moon, Sr. created this Life Tributes page to make it easy to share your memories.

Send flowers to the Moon, family.