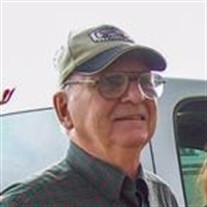 Arthur Wilhelm Dahlgren, Jr., 76, Altus, passed away on Saturday, February 1, 2020 in Lawton, Oklahoma. Funeral services will be 2:00 PM Friday, February 7, 2020 in the Kincannon Memorial Chapel with Rev. Doug Altom officiating. Burial will follow in the Davidson Cemetery under the direction of the Kincannon Funeral Home and Cremation Service. Arthur was born on November 20, 1943 in Quincy, Massachusetts to Arthur Wilhelm Dahlgren, Sr. and Mary A. Manley. He served in the US Air Force from 1964 - 1968. After his discharge, he worked in photo finishing in Massachusetts and California. He moved to Oklahoma and began working in carpentry and cabinet making. He retired after more than 40 years in the business. Arthur married Wynette Chadwick in Prairie Hill, Oklahoma on July 15, 1966. He was a former member of the Pontiac Oakland Club International and enjoyed antique cars. He enjoyed guitar playing, singing, artistry and painting, taking photos and the outdoors. Arthur was instrumental in the building of the houses located in Safety Town. His parents and brother, Jack M. Dahlgren, preceded him in death. Survivors include his wife, Wynette, of the home; two sons, Dale Dahlgren and Kris Dahlgren and wife, Anna; two grandchildren, Shelsee and DJ Dahlgren; and a brother, Ronald J. Dahlgren. The family will receive friends from 6:00 - 8:00 PM Thursday at the funeral home. Online tributes may be made at kincannonfuneralhome.com

The family of Arthur Wilhelm Dahlgren, Jr. created this Life Tributes page to make it easy to share your memories.

Send flowers to the Dahlgren, family.