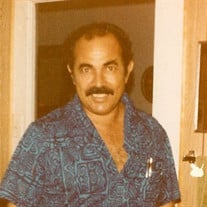 Arthur M. Ferreira, 79, Altus, passed away on Thursday, May 10, 2018 at the English Village Manor. Graveside services will be 2:00 PM Wednesday, May 16, 2018 at the Fort Sill National Cemetery in Elgin, Oklahoma. Burial with military honors will be under the direction of the Kincannon Funeral Home and Cremation Service. Arthur M. Ferreira was born on September 29, 1938 in Honokaa, Hawaii to Manuel and Carrie (Correira) Ferreira. He graduated high school and receive his Associates Degree from the University of Hawaii at Hilo. He moved to Altus two years ago from Nevada to be closer to family. He served in the United States Air Force for 20 years and had numerous tours. He retired as a Master Sergeant on July 31, 1976. Arthur married Linda Grupe Barclay in Honolulu, Hawaii on November 26, 1979. He served in law enforcement for many years and worked as a Deputy Sheriff and as security at Kona International Airport in Hawaii, and as a deputy US Marshal for court security in Alaska. He also owned a taxi service in Kona Hawaii. Arthur was a member of the Prince of Peace Catholic Church, the Brotherhood Protective Order of the Elks, Disabled American Veterans and American Legion. He was a lifetime member of the Veterans of Foreign Wars. Arthur enjoyed collecting casino collectibles, chips and memorabilia, which he started collecting when he lived in Nevada. His parents preceded him in death. Survivors include his wife, Linda, of the home; a daughter, Deborah Ferreira; a son, Michel Ferreira; two stepsons, Curtis Barclay and wife, Mandi, and Scott Lutz; five grandchildren, CJ Walker, Alexhandra Smith, and Caleb, Brooke and Silas Barclay; one great granddaughter; a sister, Elsie Ignacio; a brother, Clarence Ferreira; and many family and friends. He will be dearly missed. Aloha Arthur, until we meet again! The world won’t be the same without you. The family will receive friends from 6:00 - 8:00 PM Tuesday at the funeral home. Online tributes may be made at kincannonfuneralhome.com

Arthur M. Ferreira, 79, Altus, passed away on Thursday, May 10, 2018 at the English Village Manor. Graveside services will be 2:00 PM Wednesday, May 16, 2018 at the Fort Sill National Cemetery in Elgin, Oklahoma. Burial with military honors... View Obituary & Service Information

The family of Arthur M. Ferreira created this Life Tributes page to make it easy to share your memories.

Send flowers to the Ferreira family.