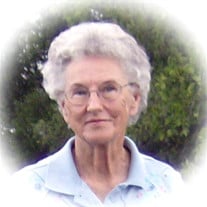 Barbara Berryman, 90, Altus, passed away April 10, 2020 in Altus. Private family graveside services will be under the direction of Kincannon Funeral Home and Cremation Service. Viewing will be available Monday - Wednesday from 9 am to 5 pm. Barbara W. Garrett was born January 16, 1930, the only child to Lee and Frances (Barrett) Garrett in Quitaque, Texas. She graduated from Hobbs High School, Hobbs, New Mexico, with the Class of 1948. Barbara and Carl Berryman were united in marriage September 23, 1948 in Ft. Stockton, Texas. To this union, four children were born: Alan, Jim, Rick and Candy. In the early years Barbara was busy taking care of the household full of children - tending to their every need - utilizing lots of patience and parental advice. As the kids grew older, Barbara began keeping books for Berryman Texaco in 1965, the same year she began as Elm and Hudson Church of Christ's secretary. In 1968 Barbara started work at Jackson County Memorial Hospital in admissions. As part of her responsibilities, she would report who was in the hospital on the radio every day. In 1974, she began working at the Department of Human Services in Altus. Barbara retired from her bookkeeping duties at the Texaco station in 1986 and later retired from DHS in 1996. Barbara was a soft spoken, quiet, loving wife, mother and grandmother who rarely got upset. Even when she did one could hardly tell it because of her tender ways. She was a long time member of the Church of Christ and taught Sunday school for many years. She was also an integral part of the food room at the Thomas Street Church of Christ and the Tamarack Road Church of Christ. She worked in it for more than 20 years and was in charge of ordering the food for the last several years. Barbara was a Cub Scout den mother in the 1960s, guiding many children's lives who still remembered her years later. She enjoyed reading, genealogy, family history, fishing, traveling and exploring the countryside with her husband Carl. She particularly enjoyed the rolling hills and textures of nature in rural settings. Most of all, Barbara treasured her time with her husband, family and grandchildren. Barbara was preceded in death by her parents, Lee and Frances Garrett. She is survived by her husband of 71 years, Carl Berryman; three sons, Alan Berryman and wife, Penny; Jim Berryman and wife, Pam; Rick Berryman and wife, Anne; one daughter, Candy Morgan and husband, Greg; seven grandchildren, Jason Pruitt and wife, Shawnda; Kim Santana and husband, Rocky; Chris Berryman and wife, Stephanie; Lauren Berryman; Dr. Erin Berryman and husband, Dr. Chad Hoffman and Richie Berryman and wife, Heidi; Garrett Berryman; and many friends. Memorial contributions may be made to the Tamarack Road Church of Christ Food Room, 1000 E. Tamarack Road, Altus, OK 73521. Online tributes may be made at kincannonfuneralhome.com

Barbara Berryman, 90, Altus, passed away April 10, 2020 in Altus. Private family graveside services will be under the direction of Kincannon Funeral Home and Cremation Service. Viewing will be available Monday - Wednesday from 9 am to... View Obituary & Service Information

The family of Barbara W. Berryman created this Life Tributes page to make it easy to share your memories.

Send flowers to the Berryman family.