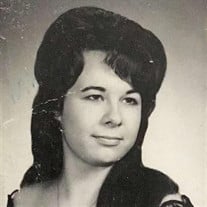 Berthamae Erland, 72, Tipton, Oklahoma passed away on Friday, August 7, 2020 at her home. Funeral services are scheduled for 2 p.m., Friday, August 14, 2020 at the Kincannon Memorial Chapel. Burial will follow services at the Olustee Cemetery under the direction of Kincannon Funeral Home and Cremation Service. Berthamae White was born on July 26, 1948 in Chaffee, Missouri to Jesse and Margie (Joye) Brown. She graduated from Atoka High School with the Class of 1966 in and later attended classes at Western Oklahoma State College. On March 3, 1972 she married Brian Erland, who was an airman at Altus Air Force Base. Berthamae and Bryan were foster parents for several years and later worked as home health caregivers. Berthamae was a loving wife, mother and grandmother who enjoyed spending time with her family. She had a love for music and singing. Berthamae cherished her time at the beach, near the water and appreciating nature. Berthamae was preceded in death by her parents, Jesse and Margie Brown; and her son, Richard Erland. Survivors include her husband, Brian, of the home; one daughter, Margiena Erland and partner, Dean Krenske; one son Thomas Erland and wife, Rosalie; nine grandchildren, Jared, Allison and Jacob Mayfield, Antonia Cordova and husband, Conrad, Richard Erland, Breanna Baker, Rosalie, Zackary and Desiree Erland; four great grandchildren, Victor and Sienna Cordova, Ryland Mayfield and Lyla Baker; two brothers Thomas Brown and wife, Debra; Jesse Brown Jr. and wife, Patricia; two nephews, Jason and Michael Brown; daughter-in-law, Kelly Erland and many friends. The Erland family will greet friends Thursday evening from 6 p.m. to 8 p.m. at Kincannon Funeral Home. All funeral and visitation guests are reminded the funeral home has a 100% mask policy in place at this time.

The family of Berthamae Erland created this Life Tributes page to make it easy to share your memories.

Send flowers to the Erland family.