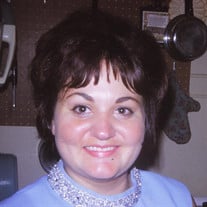 Bessie L. Williams, 74, Altus, passed away at her home on Monday, December 23, 2019. Memorial services will be 2:00 PM Tuesday, December 31, 2019 at the Kincannon Memorial Chapel with Rev. Bubba Clark officiating. Inurnment will take place at a later date in the Sunset Memorial Gardens, Lawton, under the direction of the Kincannon Funeral Home and Cremation Service. Bessie Louise Rodgers was born April 25, 1945 to Henry and Lou Ella (Harrison) Rodgers in Duncan, Oklahoma. Bessie grew up in Oklahoma and spent the most of her life there. After graduation she earned her Bachelor of Science Degree from Cameron University. Bessie and Rusty Williams, Jr. were united in marriage on August 11, 1968 in Lawton, Oklahoma. She worked as a medical technologist most of her life. Bessie was a member of the First Christian Church in Lawton and a member of the Jaycee Jane's. She enjoyed cooking, sewing, watching old western movies and was also a history buff. Her favorite times were spent with family and friends. Bessie is preceded in death by her parents; her husband, Rusty; two brothers, Dave and Don Rodgers; and two sisters, Donna Crow and Joyce Higginbotham. She leaves behind her son, Rusty Williams and wife Trisha; daughter, Kimberly Frasier and husband Russ; five grandchildren, Chloe Williams, Sydney Williams, Kagen Rightmire and husband, David, Kaylin Snyder and husband, Jerad, and Deziree Anguiano; two great-grandchildren, Lilly and Rusty George Rightmire; three brothers, Kenneth Rodgers and wife, Mary, Richard Rodgers and Robert Rodgers; a sister, Darline Melton and husband, Ray; and many other family members and friends. Online tributes may be made at kincannonfuneralhome.com

The family of Bessie Louise Williams created this Life Tributes page to make it easy to share your memories.

Send flowers to the Williams family.