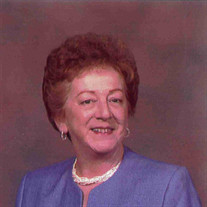 Altus resident, Betty Jean (Selvey) Marcha, 82, passed away on Tuesday, February 9, 2021. The family will hold a private inurnment at the Altus City Cemetery and a Celebration of her wonderful life will be held 11:00 AM Friday, March 26, 2021 at the Grace United Methodist Church. Services are under the direction of the Kincannon Funeral Home and Cremation Service. She was born to Keith and Marion Selvey on December 10, 1938 in Fremont, Ohio. Raised on her parent’s farm outside of Green Springs, Ohio, Betty graduated high school in May of 1956. She wed John J. Marcha, III on December 15, 1956. Soon after, they moved to Tacoma, Washington where they were stationed at McChord AFB. They were later stationed at Elmendorf AFB in Anchorage, Alaska where they celebrated Alaska becoming the 49th state in 1958. In 1959, after a brief stint as civilians, John reenlisted in the United States Air Force and they were stationed at McGuire AFB in New Jersey. In June of 1959, Rod, their first son was born. Ten years and three more boys later, Phil, Scott and Dennis, they moved to God's country at Altus AFB in the summer of '69. Becoming members of Grace United Methodist Church, Betty became the children's choir director and her love for music was instilled in her boys. After John's retirement from the USAF in 1979, Betty worked as the office manager at Southwest Metal and Trade and then M&C Construction until retiring in 2000. She was active in ESA sorority and McDowell Club of Allied Arts where her love for music flourished as a director and member of the Grace United Methodist Church Choir. Betty loved spending time gardening, baking pies and cakes, cooking, and providing for her family. Betty was preceded in death by her parents, 3 brothers, and a son, Rod. She is survived by her husband, John; sons, Phil, Scott and Dennis; grandchildren, Michael, Michelle, Ashlea, Justin, and Kat; great grandchildren, Paityn, Colby, Emily, Tinley and Elyza Jo; as well as many dear friends. In lieu of flowers the family requests donations or memorial contributions be made to the McDowell Club of the Allied Arts Scholarship Fund – Betty Marcha Scholarship Fund attention Jim Bayers, Treasurer, 220 Paseo de Vida, Altus, OK 73521 or contact him at [email protected] Online tributes may be made at kincannonfuneralhome.com

Altus resident, Betty Jean (Selvey) Marcha, 82, passed away on Tuesday, February 9, 2021. The family will hold a private inurnment at the Altus City Cemetery and a Celebration of her wonderful life will be held 11:00 AM Friday, March 26, 2021... View Obituary & Service Information

The family of Betty Jean Marcha created this Life Tributes page to make it easy to share your memories.

Send flowers to the Marcha family.