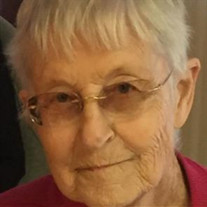 Betty L. Stewart, 92, Altus, passed away Monday, April 6, 2020 in Altus. Cremation has been provided by Kincannon Funeral Home and Cremation Service with a private family memorial to be held at a later date. Betty L. Rice was born on a farm in Blaine County, Oklahoma, March 13, 1928 to Warren Milton and Sarah Elizabeth (Sowers) Rice. She graduated from Mt. Pleasant, a one room school in southwest Blaine County, and Watonga High School in 1945. She attended Oklahoma University and worked as Deputy Court Clerk in Blaine County from 1945 to 1953. On December 31, 1946, she married Charles M. Stewart, Jr. in Watonga, Oklahoma. To this union were born: Shelly Wayne Stewart, John Charles Stewart, Douglas Warren Stewart and Rex Allen Stewart. She made profession of her faith in Jesus Christ, joined the First Baptist Church of Watonga, Oklahoma, and was baptized May 27, 1951. The family lived in Ulysses, Kansas; Plainview, Texas; and Amarillo, Texas; before moving to Altus, Oklahoma on September 15, 1959. She went to work in 1964 as director, purchasing agent and teacher of the migrant ministry day care program in southwest Oklahoma. She continued working for the Associated Christian Ministries until 1979. She worked as child care director on the Altus Air Force Base, setting up the early child development program in 1980 and 1981. She was a past president and 28-year member of ABWA. Betty owned and operated, with her husband, Betty's Unique Gifts in Downtown Altus from 1983 until 2016. She did custom painting on saws, wood items, and canvas in all mediums. She was a volunteer driver in the early days of the senior citizens transportation program in Altus. Betty played piano for the Spanish Mission of the First Baptist Church, located on south Main Street in Altus for 13 years. She was an active member of the First Baptist Church, serving in many areas, such as the library, for many years. She was preceded in death by her parents; infant son, John Charles Stewart; son, Shelly Wayne Stewart; and brother, Marvin Rice. She is survived by her husband, C. M. Stewart Jr.; son, Douglas Stewart and wife, Jani; son, Rex Stewart and wife, Vicki; daughter-in-law, Mary; and three grandchildren, Peter, Margo and Jake; special niece, Marlene Koehl; special friends, Robert and Janey Tripp.

Betty L. Stewart, 92, Altus, passed away Monday, April 6, 2020 in Altus. Cremation has been provided by Kincannon Funeral Home and Cremation Service with a private family memorial to be held at a later date. Betty L. Rice was born... View Obituary & Service Information

The family of Betty Lou Stewart created this Life Tributes page to make it easy to share your memories.

Send flowers to the Stewart family.