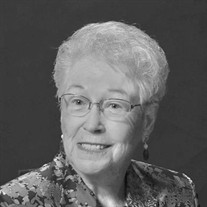 Beulah Labeta Solley Lamar, 96, of Altus, passed away on Sunday, March 14, 2021 in Altus, Oklahoma. The family will hold a private graveside service at 2:00 PM on Saturday, March 20, 2021 at the Oak Grove Cemetery in Coyle, Oklahoma. Burial will be under the direction of the Kincannon Funeral Home and Cremation Service. She was born on Dec. 20, 1924 in Iola, Texas to Thomas Arthur and Elizabeth Solley. She had three siblings, T. A., Margie and James, and she told stories of working alongside her father in the cotton fields of west Texas. She attended the Roosevelt School near Lubbock, Texas. In June of 1943 she married James Leonard Lamar, a young airman at Lubbock Airfield, whom she had met while she was working at Cloverlake Dairy. James went on to a career in the United States Air Force, and she made a home for the family wherever they were stationed. Together she and James raised four daughters: Gloria, Sheila, Donna and Leah. She was a lifelong learner who enjoyed reading history, geography and her Bible. She loved gardening, sewing, art, music and playing cards. As a member of First Baptist Church Altus, she worked with preschoolers in Sunday school, vacation Bible school and graded choir. She also worked with the Southwest Baptist Association in the training of pre-school teachers, which included two mission trips to new churches in rural Canada. Later in her life, Labeta lived at Tamarack Assisted Living Center, and she was a member of the faith community at First United Methodist Church in Altus. Labeta was preceded in death by her parents, three siblings, and her husband, James. She is survived by her daughters: Gloria Lamar, Sheila Strawn (Steve), Donna Tucker (Mike) and Leah Nellis (John Covaleskie); grandchildren: Erik Strawn (Kerry), Andrea Reilly (Peter), Zack Tucker (Jennifer), Marty Hightower (DJ) and Alonna DeSpain (Kalin); and great grandchildren: Cole and Delaney Schneider, Rance and Zane Tucker, Lillie Labeta and Davis Hightower, and Jack and Cal Reilly. The family would like to thank the wonderful people at Tamarack Assisted Living and the caring staff of Jackson County Memorial Hospital Hospice. Memorials may be made to the Museum of the Western Prairie, 1100 N. Hightower, Altus, OK 73521. Online tributes may be made at kincannfuneralhome.com

Beulah Labeta Solley Lamar, 96, of Altus, passed away on Sunday, March 14, 2021 in Altus, Oklahoma. The family will hold a private graveside service at 2:00 PM on Saturday, March 20, 2021 at the Oak Grove Cemetery in Coyle, Oklahoma. Burial... View Obituary & Service Information

The family of Beulah Labeta Lamar created this Life Tributes page to make it easy to share your memories.

Beulah Labeta Solley Lamar, 96, of Altus, passed away on Sunday,...

Send flowers to the Lamar family.