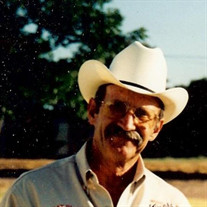 Bill Box, 82, Blair, passed away Saturday, June 27, 2020 at home surrounded by a host of his family members. A benefit ball game was being held at the time of his passing right outside his back door at his beloved "The Ball Park" which he built and provided for the Navajo School baseball / softball players. All the ball players lined up on the field in honor of Bill's last ride away from the field. The family has chosen cremation and a Celebration of Bill’s Life will be held soon. Kincannon Funeral Home and Cremation Service has been entrusted to provide services for the Box family. Billy Bob Box was born October 16, 1937 in Mountain Park, Oklahoma to Jess V. and Alice (Parsons) Box. He graduated Snyder High School with the Class of 1955 and continued his education at Cameron University, attaining a Bachelor of Science Degree in Agriculture in 1959. While attending Cameron, Bill married Sonja Polk in Headrick, Oklahoma on August 17, 1957 and to this union three children were born, Denise, Brent and Jon. Bill had worked as Manager of the Altus Cotton Oil Mill for about 25 years from 1963 until 1988. He served as President of the Jackson County Fair Board; President of the Great Plains Rodeo; President several times of the Navajo School Board; and President of the Oklahoma Greyhound Association. Bill was of the Christian Faith and enjoyed music – routinely playing his bass guitar at home. He was especially tuned into all sports, especially Navajo basketball, baseball and softball. So much so, that Bill retired early so he could devote more time building “The Ball Park”, by his house, for the Navajo ball players. It became the home of the Navajo Girls Softball where they practiced and frequently hosted tournaments. Bill was preceded in death by his parents. He is survived by his wife, Sonja, of 63 years; daughter, Denise Clement and husband, Terry; Brent Box and wife, Judy; and Jon Box and wife, Teri; ten grandchildren, Cassidy Daniels and husband, Willie; Matt Levick and wife, Jessica; Kelsi Moody and husband, Justin; Braden and Tyler Box; Taylor Box and husband, Willis Price; Tanner Box; Jaclyn, Marisa and Brandon Schmidt; six great grandchildren, Levi and Luke Levick; Alexis Lee; Lila Daniels; Abagail Moody and Waylon Price; sister and brother-in-law, Sandra Gay Sockwell and husband, Keith; and many friends. In lieu of flowers, please make memorial contributions to: Sheridan’s Sunshine Foundation @ 920 Isabella Lane, Altus, OK 73521 or call 580-301-0906. Online tributes may be made at kincannonfuneralhome.com

Bill Box, 82, Blair, passed away Saturday, June 27, 2020 at home surrounded by a host of his family members. A benefit ball game was being held at the time of his passing right outside his back door at his beloved "The Ball Park" which... View Obituary & Service Information

The family of Bill Box created this Life Tributes page to make it easy to share your memories.

Send flowers to the Box family.