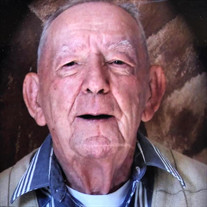 Billie Gray Smith, 86, Headrick, passed away on Monday, October 19, 2020 at the Comanche County Memorial Hospital in Lawton, Oklahoma. Funeral services will be 11:00 AM Monday, October 26, 2020 in the Kincannon Memorial Chapel with Pastor Rich Ainslie officiating. Burial will follow in the Fort Sill National Cemetery, Elgin, under the direction of the Kincannon Funeral Home and Cremation Service. Billie Gray Smith was born on June 24, 1934 in Winston-Salem, North Carolina to Moir and Blaine (Hall) Smith. He grew up in Winston-Salem and entered into the United States Air Force on February 7, 1952. Billie married Charlotte “June” Barkley on February 7, 1953 in Vancouver, Washington. He served his country for over 20 years and retired as a Technical Sergeant on August 31, 1972. He enjoyed being a part of the military and traveling with his family. Billie was a lifetime member of the Veterans of Foreign Wars and a faithful member of the First Baptist Church in Headrick, Oklahoma. His parents, wife, a son, Norman Smith, and two sisters, Faye Smith and Ann Speck, preceded him in death. Survivors include a daughter, Linda Smith-Higginbotham; two sons, Carey Smith and Billy Smith; 11 grandchildren; 12 great grandchildren; and four siblings, Harold Smith, Sandy Houser, Larry Smith and Kay Bowels. Online tributes may be made at kincannonfuneralhome.com

The family of Billie Gray Smith created this Life Tributes page to make it easy to share your memories.

Send flowers to the Smith family.