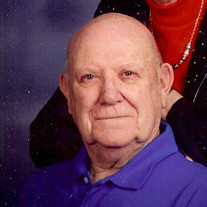 Billy Joe Dickson, 88, Altus, passed away on Sunday, February 24, 2019 at his home. Memorial services will be 10:00 AM Saturday, March 2, 2019 in the Grace United Methodist Church with Rev. Bruce Davis and Rev. Chris Tiger officiating. Arrangements are under the direction of the Kincannon Funeral Home and Cremation Service. Billy Joe Dickson was born on August 28, 1930 in Murillo, Texas to Earl and Leona (Hodges) Dickson. He lived in Texas until his high school years when he moved to Arnett, Oklahoma. He met his high school sweetheart, Janice Collins, and they were married on January 31, 1948. Janice died on July 24, 1984. They had three children, James Dickson, Jerry Dickson and Renee Dickson Hoback. Billy moved his family to Altus after being transferred by Long Bell in the 1950's. He then worked for Wilson Dry Goods, Altus Office Supply, Otasco and Carpenter Paper Company, as a salesman. He retired from Carpenter Paper Company in 1993 after 15 years. He married LaDean Stanley Dart on November 19, 1986. They were married for 32 years and enjoyed a loving and happy life with lots of laughter. He was a charter member of the Grace United Methodist Church and served in many areas of the church. He sang in the Choir all the years he was at Grace Church. Billy served as chairman, member and teacher for many departments of the church. He loved his God, his Church and the many friends he met there. Billy loved to golf, hunt, travel, play bridge, was a great handyman and an avid Thunder fan. He loved all kinds of music and had a great tenor voice. He was a wonderful, loving husband, great father, and friend to all who knew him. He was preceded in death by his parents, Earl and Leona Dickson, his in-laws, Richard and Vera Collins, Leo and Iris Stanley Witkovski, Forrest Witkovski, a sister, Jean Dickson, sister and brother-in-law, Shorty and Charlie Wellman, sister-in-law and brother-in-law, Maurice and Sharron Stanley Baldwin, and a step grandson, Justin Freeze. Billy is survived by his wife of the home; children, James and Jerry Dickson, and Renee Hoback and husband, Buddy; step children, Jerry Dart, Robby Dart, and Christy Woods and husband, Earl; grandchildren, Billy Dickson and wife, Danielle, Rachel Barker and husband, Andy, and Ryan Hoback; step-grandchildren, Christopher Dart, Mike Dart and Brandon Freeze; and great grandsons, Ryder Barker, Garrett Barker, Roper Freeze, and Noah and Nolen Dart; niece Terry and Bob Bussinger, nephew Todd and Karen Wellman, and many friends. The family will receive friends from 5:00 - 7:00 PM, Friday, March 1, 2019 at the home of Billy and LaDean Dickson. Online tributes may be made at kincannonfuneralhome.com

The family of Billy Joe Dickson created this Life Tributes page to make it easy to share your memories.

Send flowers to the Dickson family.