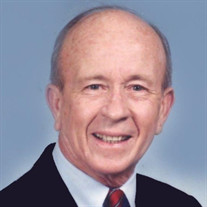 Bobby Webber Dantzler passed away on Wednesday, November 10, 2021 at the age of 89. A Reception will be from 6:00 PM – 8:00 PM on Monday, November 15, 2021 at the Kincannon Funeral Home. A Graveside Service will be at 2:00 PM on Tuesday, November 16th at the Altus City Cemetery. Bob, the son of Jack and Eula Mae Dantzler, was born on May 24, 1932 in High Point, North Carolina. He graduated from the University of North Carolina where he was a member of the Chi Psi Fraternity and ROTC. Following graduation, he joined the United States Air Force where he was a pilot flying B47s. He was active and flew in many international missions from 1955-1958. He continued to serve in the military reserves until honorably discharged in 1970. While serving his country, he was stationed in Altus, Oklahoma where he met and married Sally Jane Davis. They wed April 7, 1958. They opened the first Dairy Queen in Altus which was on Broadway. They also had the first putt-putt directly behind the Dairy Queen which was a favorite spot for many. They eventually sold the Dairy Queen to open a new business. He and Sally owned and operated the only cotton mote gin in Altus until a cotton fire on Nov. 16, 1988 destroyed the business. After this historic fire, they rebuilt this business and continued to work together until Sally passed away in 2006. Bob and Sally have two daughters, Nancy Anne of Altus and Alice Jane of Norman. After Sally lost a battle with cancer, Bob married Betty Humble Sharpe, June 16, 2007 in Mooresville, North Carolina. Bob and Betty had known each other since they were in high school in Asheboro, North Carolina. Bob was a deacon and lifelong member of the First Presbyterian Church in Altus where he was actively involved in the upkeep and running of the church. In his later years, Bob had the job of ringing the church bells every Sunday morning, which called the service to begin. While in the Air Force he was a member of the Officer's Club, where he held office and the Air Force Association after being discharged. He was also a member of the Elks Club. Bob was an avid golfer; he taught himself to play while in the Air Force. He traveled and played on many famous courses around the U.S. Bob was preceded in death by his wife, Sally; his parents, Jack and Eula Mae Dantzler; his sister, Mary Lou Pulliam and husband, Hal; his sister-in -law, Merrill Parker; his in-laws, Robert and Evelyn Davis; and his niece, Barbara Parker Baartman. He is survived by his wife, Betty Dantzler; his daughters, Nancy and Alice Dantzler. He has two granddaughters, Maryanne Dantzler Kyer and Abigail Dantzler-Woodruff who he was very proud of. He also leaves his nephews, Kelly Pulliam and his son, Hal, and Halton Pulliam; his nieces, Robbe and her husband, Danny LaMunyon, Merrill Smith and husband, Randy, Elizabeth McCuistion and husband, Danny, Sally George, and Margaret Disney. He also leaves behind his stepson, Chris Funderburke, and Chris's children, Sarah, and John. Bob also had many great nieces and nephews. A memorial fund is set up at the First Presbyterian Church-Altus in Bob’s name. Those interested in giving may send gifts to church. Online tributes may be made at kincannonfuneralhome.com.

The family of Bob Dantzler created this Life Tributes page to make it easy to share your memories.

Send flowers to the Dantzler family.