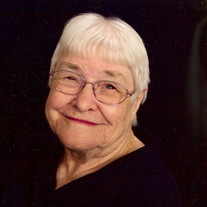 Bonnie Faye Parsley, 91, Frederick, passed away on Friday, May 25, 2018 in Frederick, Oklahoma. Funeral services will be 2:00 PM Sunday, May 27, 2018 in the Kincannon Memorial Chapel with Rev. Shane Kendrix officiating. Burial will follow in the Altus City Cemetery under the direction of the Kincannon Funeral Home and Cremation Service. Bonnie Faye Scalf was born on September 25, 1926 in Caddo, Oklahoma to Harvey Metz and Clara Bell (Peek) Scalf. She was raised in Matoy, Oklahoma during her early years and attended school in Matoy, where she played baseball on the boy's team. At home though, Faye was the baker of many desserts for the family. Later, the family moved to southwest Oklahoma and she attended school at Victory and Southside, near Elmer, Oklahoma. She later married Elmer Parsley on May 27, 1944 in Altus where they lived for 62 years. Elmer passed away in May of 2007. Faye was a homemaker, taking care of her husband and two daughters, Linda and Barbara. Later in life after raising her family, she worked 12 years at Navajoe Laundry. She retired in 1985. She loved and cherished her grandchildren and great grandchildren, who called her Nanny and Grandma. In her later years in life, she spent many hours crocheting, doing embroidery and working word book puzzles. Faye loved reading her Bible and was a member of the Trinity Baptist Church in Altus. Faye was preceded in death by her parents, husband, three brothers, Bill Scalf, James "Little Man" Scalf," and Floyd Scalf, and a sister, Sharon Kay Scalf. Survivors include two daughters, Linda Kessler and husband, George, and Barbara Gray; her grandchildren, Robert Kessler and wife, Cheri, Amy Marcontell and husband, Andy, and Elizabeth Wade and husband, Daniel; great grandchildren, Alex and Ashley Kessler, Grayson and Gage Marcontell, Jackson Wade and Baby Noah on the way; two sisters, Cora Smith and Lahonda Carter; and three brothers, Haskell Scalf and wife, Evaline, Gerald Scalf and wife, Julia, and Wayland Scalf. Family and friends unable to attend may log on to kincannonfuneralhome.com, 30 minutes prior to the service, to view the live webcast of the funeral. Online tributes may be made at kincannonfuneralhome.com

Bonnie Faye Parsley, 91, Frederick, passed away on Friday, May 25, 2018 in Frederick, Oklahoma. Funeral services will be 2:00 PM Sunday, May 27, 2018 in the Kincannon Memorial Chapel with Rev. Shane Kendrix officiating. Burial will follow... View Obituary & Service Information

The family of Bonnie Faye Parsley created this Life Tributes page to make it easy to share your memories.

Bonnie Faye Parsley, 91, Frederick, passed away on Friday, May...

Send flowers to the Parsley family.