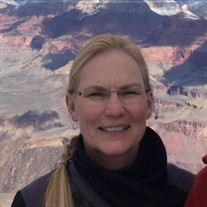 Brenda Mahan was born May 23, 1957 in Austin, Texas, to Rev. James and Shirley Mahan. As the middle child of five children, her touchstone throughout her life was her family. She cherished every member, as they cherished her. Mahan graduated from Altus High School in 1975, earned a bachelor’s degree in social studies from Cameron University in 1980, a master’s degree in education from Southwestern Oklahoma State University in 1986, and a National Board Certification, the highest credential in the teaching profession, in 2005. She taught in the lower elementary grades in both the Blair Public Schools and the Altus Public Schools. During her retirement years, Mahan was instrumental in forming the Altus Animal Welfare Association, a nonprofit organization which has secured much-needed reform to animal welfare in Altus. Mahan was a loving wife, a devoted mother, and a doting grandmother. In fact, her grandchildren associated her so much with dinner time that they christened her “Dino.” Determined to have the chance to know her grandchildren, Mahan fought a valiant battle against lung cancer for over four and half years. Mahan was preceded in death by her parents, the Rev. James and Shirley Mahan, and a brother, Timothy Mahan. She is survived by her husband, Tom Buchanan, of the home; her son, Julian Lowell and his wife, Kimberlee, of Altus, and their children, Jude, Clare, and James; step-daughter, Elizabeth Jacome and husband, Kenneth, and their children, Jacob, Isabella, and Alexandra of Tucson, Arizona; step-daughter, Melissa Smith and her children, Holden and Elise, of Longmont, Colorado; sister, Elizabeth Wallace, of Altus; brother, James Mahan and his wife, Carla, of Lubbock, Texas; brother, Thomas Mahan and his wife, Andrea, of Lubbock, Texas; many nephew and nieces, and a host of friends. Online tributes may be made at kincannonfuneralhome.com

Brenda Mahan was born May 23, 1957 in Austin, Texas, to Rev. James and Shirley Mahan. As the middle child of five children, her touchstone throughout her life was her family. She cherished every member, as they cherished her. Mahan graduated... View Obituary & Service Information

The family of Brenda Gail Mahan created this Life Tributes page to make it easy to share your memories.

Send flowers to the Mahan family.