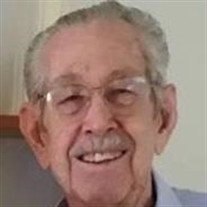 Carl Miller Berryman, 92, Altus, passed away from natural causes on Friday, January 22, 2021 surrounded by his family at his home. Private family graveside services were under the direction of the Kincannon Funeral Home and Cremation Service. Carl Miller Berryman was born on August 22, 1928 in Archer City, TX to Dewey Miller and Hazel Loralee (Umberson) Berryman. He began school there before the family moved to Wichita Falls, TX. While there, he continued his education and also worked in a motorcycle shop and a plumbing store. He was a member of the Civil Air Patrol, where he learned to fly several different planes. Later, the family moved to Hobbs, NM. It was there that he met the love of his life Barbara Wayne Garrett. They were married on September 23, 1948 in Fort Stockton, Texas. Through the years, Carl held a variety of jobs including oil field work, truck driving, and auto mechanics. He was best known in Altus as the owner-operator of Berryman Texaco. He was well known for his carburetor work. During this time, he also spent many years designing, building, and flying model airplanes. He won numerous model airplane contests, accumulating many trophies. He later became the manager of the Walmart automotive department, from which he retired in 1991. After retirement, he and Barbara spent many happy years fishing together and traveling the country. Carl was a member of the Tamarack Road Church of Christ. He was actively involved in the food room at church. On special occasions, he read scripture during church services, where his voice was often referred to as "the voice of God". Carl was preceded in death by his parents, his wife of 71 years, Barbara, a brother, George Alonzo Berryman, and three sisters, Barbara June Register, Dorothy Lee Berryman, and Mary Ella Berryman. Survivors include three sons, Alan Berryman and wife, Penny, Jim Berryman and wife, Pam, and Rick Berryman and wife, Anne; one daughter, Candy Morgan and husband, Greg; seven grandchildren Jason Pruitt and wife, Shawnda, Kim Santana and husband, Rocky, Chris Berryman and wife, Stephanie, Lauren Berryman and fiancé, Kyle Stamper, Dr. Erin Berryman and husband, Dr. Chad Hoffman, Richie Berryman and wife, Heidi, and Garrett Berryman; and many great-grandchildren, family and friends. Online tributes may be made at kincannonfuneralhome.com

Carl Miller Berryman, 92, Altus, passed away from natural causes on Friday, January 22, 2021 surrounded by his family at his home. Private family graveside services were under the direction of the Kincannon Funeral Home and Cremation Service. Carl... View Obituary & Service Information

The family of Carl Berryman created this Life Tributes page to make it easy to share your memories.

Send flowers to the Berryman family.