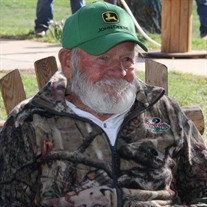 Carl Bryer, 87, Eldorado, passed away at his home on Thursday, August 15, 2019. A viewing will be held starting Monday afternoon, August 19, 2019, and all day on Tuesday at the Kincannon Eldorado Chapel. The family will receive friends from... View Obituary & Service Information

The family of Carl Bryer created this Life Tributes page to make it easy to share your memories.

Carl Bryer, 87, Eldorado, passed away at his home on Thursday,...

Send flowers to the Bryer family.