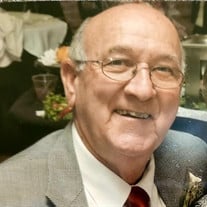 Carl E. L. Clayton of Altus passed away on Sunday, April 17, 2022, at Mangum Regional Medical Center in Mangum, Oklahoma. Funeral services will be held at 2 p.m., Saturday, April 23, 2022, at the First Baptist Church in Altus with Dr. Jeff Moore and Rev. Doug Altom officiating. Burial will follow at the Altus City Cemetery under the direction of Kincannon Funeral Home and Cremation Service. The family will receive friends from 6:00 - 8:00 PM Friday at the funeral home. Carl E. L. Clayton was born on May 14, 1936, in Mangum, Oklahoma, to Oran Hansel and Minnie Lara (Mobley) Clayton. He graduated from Mangum High School with the Class of 1954. Carl was President of his class, quarterback of his football team, along with playing basketball and baseball. He married Karol Jahree Sheppard in 1956 and to this union two sons were born. Carl worked in plumbing and seismography before establishing a 20 plus year career with Armco Steel. From there he completed his lifelong work as District Manager of the Greer County Conservation District serving for over 20 years; much of the grass that now supports our abundant wildlife was established during his tenure through the CRP program and his diligent efforts. As a committed Christian from an early age, Carl served as a deacon, usher, greeter, Sunday school teacher, prayer room warrior, volunteer and a committed servant of God. He’s been a member of the First Baptist Church in Altus since 1982 and First Baptist Church in Mangum since 1951. He married Ruth N. Ables Metcalf on May 1, 1982, in the backyard of Ken and Margaret McFall by Hayes Wicker. Carl enjoyed his church, his family, and working with his hands. He spent countless hours playing with his grandchildren and attending their activities, playing golf, fishing, sitting on the patio smoking his pipe, and visiting with friends. He was preceded in death by his parents, Oran and Minnie Clayton; first wife, Karol Sheppard Clayton; a granddaughter, Cassie Brooke Clayton; a son, Kerry Metcalf; a sister, Joyce; and four brothers, Oran Junior, Buddy, Jack and Bill. Carl is survived by his wife, Ruth; his two sons, Dale Clayton and wife, Cindy and Kyle Clayton; daughter, Kenna Cataudella and husband, Steve; six grandchildren, Dustin Clayton, Megan Clayton Roberts and husband, Matthew, Morgan Clayton-Estebane, Jace Clayton, Ian Jones, Austin Cataudella, Brooks Cataudella, and Tristan Metcalf; great grandchildren, Aidan Estebane, Cynthia Estebane, Bradan Clayton, Mila Estebane, Clayton Roberts, Abigail Roberts, Camille Jones, and Henry Cataudella. Memorial contributions may be made to Altus First Baptist Church, Altus-Mangum Cancer Support or the charity of your choice. Online tributes may be made at kincannonfuneralhome.com

The family of Carl E. L. Clayton created this Life Tributes page to make it easy to share your memories.

Send flowers to the Clayton family.