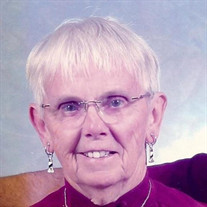 Carolyn L. King, 89, long time Altus resident, passed away Sunday, September 20, 2020 at the Courtyards at Magnolia Creek in Altus. A Celebration of Life will be 10 a.m. Saturday, September 26, 2020 at the Grace United Methodist Church with Bruce Davis officiating. Inurnment of the cremated remains will take place at Ft. Sill National Cemetery 11 a.m. Monday, September 28, 2020. Memorial services and cremation services are both under the direction of Kincannon Funeral Home and Cremation Service. Carolyn Loretta Jenkins was born February 13, 1931 in Buzzard Bay, Massachusetts to Herbert and Grace (Churchill) Jenkins. She graduated from Bourne High School, Bourne, Massachusetts, with the Class of 1948 and married Daniel “Danny” King on May 24, 1952. Danny enlisted in the Army Air Corps in 1946 and in 1947 migrated to the newly formed US Air Force. While stationed at Otis AFB in Cape Cod, Ma. He met Carolyn at a base sponsored dance. Later, while at home on leave for two week, Danny and Carolyn were married at Bourne United Methodist Church. Their first assignment was to Donaldson AFB in Greenville, South Carolina, where the first of four children, Bruce, was born in 1953. The Air Force took them many places, including Louisiana, England, and Massachusetts, where they had their second and third sons. Neil was born in 1957 and Glenn was born in 1960. Their final station was Altus Air Force Base, Altus, Oklahoma, where their daughter, Sharon, was born in 1968. Danny retired from the military in 1969. Carolyn enjoyed being an Air Force wife and a homemaker her whole adult life. She participated in all her children’s activities including baseball, band parents, and being a room mom. After Danny retired from First State Bank, they enjoyed traveling all over the United States. Their first trip was to Alaska for four months. They enjoyed traveling to Cape Cod, and going on many, many cruises. Carolyn enjoyed reading, puzzles, word games and playing chicken foot (dominoes) with her family. Her greatest joys were her grandchildren. She attended many of their activities and enjoyed taking them camping. Both Carolyn and Danny were members of Grace Methodist Church, and she was a member of the choir as well as being very active in United Methodist women and the Fellowship Sunday Class. She was preceded in death by her parents, Herbert and Grace Jenkins; her husband, Danny in 2016; her sisters, Marge Babbitt and husband, Bill; and Lucia Davis and husband, Bob; two brothers, Robert Jenkins, who died in childhood; and Kenny Jenkins; sister-in-law, Marion Jenkins; and infant granddaughter, Sarah Grace Ames. Carolyn is survived by three sons, Bruce King and wife, Vickie; Neil King and wife Heather; and Glenn King; one daughter, Sharon Ames and husband, Brian; six grandchildren, Erica Trammell and husband, Shaun; Dillon King; Dalton King; Damon King; Hannah Bevington and husband, Andrew; and Bethany Ames; four great grandchildren, Aspen Trammell, Lily King, Ryker King and Harper King; brother, John Jenkins; sister-in-law, Cynthia King; her cousin, Christine Farber; and many nieces, nephews and friends. The King family will greet friends Friday evening, September 25th, from 6 p.m. to 8 p.m. at the funeral home. Online tributes may be made at kincannonfuneralhome.com

Carolyn L. King, 89, long time Altus resident, passed away Sunday, September 20, 2020 at the Courtyards at Magnolia Creek in Altus. A Celebration of Life will be 10 a.m. Saturday, September 26, 2020 at the Grace United Methodist Church with... View Obituary & Service Information

The family of Carolyn L. King created this Life Tributes page to make it easy to share your memories.

Send flowers to the King family.