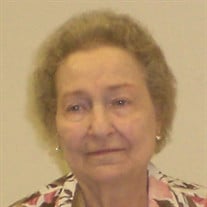 Carolyn A. McElroy, 86, Warren, passed away Friday morning, May 10, 2019 at English Village Manor in Altus. Funeral services have been scheduled for 10:00 AM, Tuesday, May 14, 2019 at the Kincannon Memorial Chapel with Rev. Dennis Osborne officiating. Burial will follow in the Warren Cemetery. Services have been entrusted to Kincannon Funeral Home and Cremation Service. Carolyn Ann Goolsby was born January 27, 1933 at home, in Altus, Oklahoma to George Tracy and Bessie Lee (Haley) Goolsby. The family moved to Ozark when Carolyn was 5 years old and she was saved and baptized at the Tabernacle Baptist Church in Altus. Her family then moved to Warren, Oklahoma where she attended and graduated from Warren High School with the class of 1950. It was in Warren that she met Clifford McElroy. Carolyn and Clifford were united in marriage on June 29, 1950 in Blair, Oklahoma. They moved to Appleton, Wisconsin where Carolyn went to work at Sears and the Tuttle Press Company. Cliff and Carolyn moved back to Warren when Cliff was drafted into the Army. Carolyn worked for Civil Service in Camp Roberts, Colorado until Cliff was sent to Korea and they moved to Altus Air Force Base when Cliff came home. The family then moved to El Paso, Texas where Carolyn worked for the Texas Highway Department. In 1970 they moved back to Warren and built their home seven miles east of Blair. Carolyn enjoyed baking pies, feeding birds and raising flowers. She loved singing with her sisters and having her family around her, especially her grandchildren. Carolyn is preceded in death by her parents; her husband; son, Jimmy; sister, Audrey Wiese and three brothers, Tracy, Herman and Thurman Goolsby. She is survived by her daughter, Sandra Fanning and husband, Mark; three grandchildren, Russell Fanning, C.J. McElroy, and Carter Fanning; three great grandchildren, C.J. McElroy III, Poppy McElroy and Benjamin Fanning; two sisters, Nita Elliott and Joyce Gipson; and many other relatives and friends The McElroy family will greet friends Monday evening from 6 to 8 p.m. at the funeral home.

Carolyn A. McElroy, 86, Warren, passed away Friday morning, May 10, 2019 at English Village Manor in Altus. Funeral services have been scheduled for 10:00 AM, Tuesday, May 14, 2019 at the Kincannon Memorial Chapel with Rev. Dennis Osborne officiating.... View Obituary & Service Information

The family of Carolyn Ann McElroy created this Life Tributes page to make it easy to share your memories.

Carolyn A. McElroy, 86, Warren, passed away Friday morning, May...

Send flowers to the McElroy family.