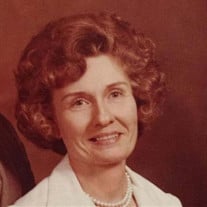 Celia M. Caldwell, 90, Altus, passed away August 12, 2018 at Jackson County Memorial Hospital. Memorial services will be 2 p.m. Saturday, August 18, 2018 at Kincannon Funeral Home. A private family burial was held earlier. Memorial services and graveside services are under the direction of Kincannon Funeral Home and Cremation Service. Celia Marie Harris was born October 17, 1927 to Irvin Sylvester and Minnie Ruth (Ames) Harris in Talmage, Iowa. Celia was the youngest of seven children. She attended school in Hayward, Minnesota and Afton, Iowa. Celia and Howard C. Caldwell were united in marriage May 4, 1947 in Afton, Iowa and to this union five children were born. Celia taught school in Iowa for several years. She and Howard moved from Iowa to Southwest Oklahoma in 1949, where they started their custom harvesting business. Celia was baptized on February 3, 1952 and was a member of the Congregation of Jehovah's Witnesses in Altus. After her career in teaching she focused on being a loving wife, mother, grandmother and helper on the farm. She enjoyed dancing, music, sewing and reading. Her greatest joy was spending time with her children and grandchildren. Celia is preceded in death by her parents; her husband in 2007; two sisters, Opal Larkins and Wanda Harris; and four brothers, Wayne Harris, William "Bill" Harris, Harold Harris, and Howard Harris. She leaves behind to cherish her memory one daughter, Sheila Smith; four sons, Phil Caldwell and wife, Pat, Martin Caldwell and wife, Cynthia, Johnny Caldwell and Tim Caldwell; seven grandchildren, Becky Waldroop, Jessica Clark and husband, Corey, Lisa Shelton and husband, Jon, Stacy Smith and husband, Dustin, Joshua Caldwell and wife, Aalena, Konor Smith and Gannon Smith; eight great grandchildren, Erin, Brooke, Lily, Evie, Owen, Sebastian, Lincoln and Summit; and many other family members and friends. Family and friends unable to attend may log on to kincannonfuneralhome.com, 30 minutes prior to the service, to view the live webcast of the funeral. Online tributes may be made at kincannonfuneralhome.com

The family of Celia M. Caldwell created this Life Tributes page to make it easy to share your memories.

Send flowers to the Caldwell family.