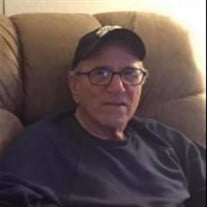 Charles R. “Mac” McNatt, Jr., 83, passed away peacefully in his daughters’ arms on Tuesday, April 20, 2021 in Altus, Oklahoma. A private family service with military honors will be held at the Altus City Cemetery. Burial and arrangements are under the care of Kincannon Funeral Home and Cremation Service. Charles R. “Mac” McNatt, Jr. was born on December 5, 1937 in Uniontown, Pennsylvania to Charles Robert and Elizabeth (Evansek) McNatt. He grew up in Pennsylvania and enlisted into the United States Navy in 1955. Mac served the Navy for four years before transferring to the United States Air Force in 1959. He played drums in the Air Force Band and learned jiu-jitsu while stationed in Japan. Mac proudly served in the 38th Tactical Reconnaissance Squadron for another 17 years and retired in 1976 as a Master Sergeant. Mac obtained a Bachelors of Science Degree from Southwestern Oklahoma State University in Weatherford, Oklahoma. He worked as a Medical Technician for more than 28 years at the Jackson County Memorial Hospital before retiring again. He married Barbara Funk in 1993. Mac was an accomplished drummer and enjoyed playing the piano and listening to Jazz. He was a lifelong resident of Altus and enjoyed riding motorcycles and playing with his loyal and faithful companion, Kirby. Many a day have went by where you could find Mac with the Coffee Crew at Friendship Inn just “shootin’ the bull.” His parents, wife, a brother, Robert McNatt, and two sisters, Patty Luick and Jenna Phillips, preceded him in death. Survivors include two daughters, Lea Rae Keeney of Pennsylvania and Michele Rae Robison and husband, Jack, of Florida; two sons, Michael Ray McNatt and wife, Ginny, of Mississippi and Christopher Cannon of Michigan; a stepson, Thomas Edward Shutz; three grandchildren, Master Chief Petty Officer George N. Keeney and wife, Kristy, Jason Keeney and Faraah McNatt; a great grandson, Aiden; a sister, Desi Zeller; and a dear close friend, Mike Adams. Online tributes may be made at kincannonfuneralhome.com

The family of Charles Robert "Mac" McNatt created this Life Tributes page to make it easy to share your memories.

Send flowers to the McNatt family.