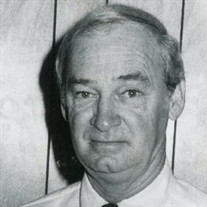 Charles Marvin “Stew” Stewart, Jr., 96, Altus, passed away on Friday, October 8, 2021 at The Courtyards at Magnolia Creek. No services are scheduled at this time and arrangements are under the care of the Kincannon Funeral Home and Cremation Service. Charles Marvin “Stew” Stewart, Jr. was born the oldest of nine boys and one girl to Charles Marvin, Sr. and Ernestine (Smith) Stewart on August 9, 1925 in Loveland, Oklahoma. He grew up and attended public schools at Loyal in Kingfisher County and Hitchcock in Blaine County, Oklahoma. Stew graduated high school at Hitchcock in 1943. He joined the U.S. Navy and served on the U.S. Cobia, a combat submarine, making four war patrols during World War II. Returning home after the war, Stew met and married Betty Rice on December 31, 1946 in Watonga, Oklahoma. From this marriage four boys were born, Shelly Wayne, John Charles, Douglas Warren and Rex Allen. Stew went to work for Long-Bell Lumber Company in the spring of 1947 and managed retail building material operations until December of 1962 where, after working in this capacity in Oklahoma, Kansas, and Texas, he purchased the business here in Altus and operated it as the C.M. Stewart Lumber Company until it was lost in a fire on November 30, 1965. His next job was with the Southwest Oklahoma Community Action Counties. He was instrumental in the startup of several programs helping the senior citizens and the low income of the area such as the Southwest Transit Buses and the Senior Meals Programs. Stew supervised the Mutual Self-Help Housing Program, which was the forerunner to Habitat for Humanity, helping fifty-nine families build new homes with their own labor. Stew served two terms on the Altus City Council, one as vice mayor, back in the 1960’s. He served as President of the Altus Lions Club and President of the Southwest Oklahoma Home Builders Association. While on the City Council, as chairman of Industrial Relations Committee, he was instrumental in securing the Kellwood Company’s plant location for Altus. After Stew’s war experience, not knowing of his lost condition, in 1947 he found Jesus Christ and accepted Him as his personal Savior. On the last Sunday morning of a two-week revival at the First Baptist Church in Watonga, Oklahoma, he responded to the witness of a Baptist Deacon and attended the service. The Holy Spirit convicted him of his sinful, lost condition, breaking his heart and on his knees at that altar, he found the Fountain that washed his sins and lost condition white as snow by His Blood. Stew was baptized that very afternoon and ordained a Deacon on May 27, 1951. He served as a Deacon for First Baptist Church for 60 years. Stew served in most lay offices of the churches of Watonga, Oklahoma, Ulysses, Kansas, Plainview, Texas, Amarillo, Texas and Altus, Oklahoma. He was preceded in death by his wife of 72 years, Betty; his parents; infant son, John Charles; a son, Shelly Wayne; and his siblings. Survivors include two sons, Douglas and wife, Jani, and Rex and wife, Vicki; three grandchildren, Margo, Jake and Peter; and a daughter-in-law, Mary Stewart. Online tributes may be made at kincannonfuneralhome.com

Charles Marvin &#8220;Stew&#8221; Stewart, Jr., 96, Altus, passed away on Friday, October 8, 2021 at The Courtyards at Magnolia Creek. No services are scheduled at this time and arrangements are under the care of the Kincannon Funeral Home and... View Obituary & Service Information

The family of Charles Marvin "Stew" Stewart, Jr. created this Life Tributes page to make it easy to share your memories.

Send flowers to the Stewart, family.