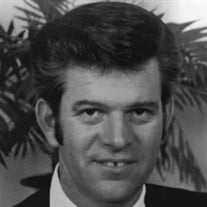 Charles Evans “Chuck” Stillwell, 80, of Altus, passed away Saturday, August 14, 2021 in Altus Oklahoma following a long battle with multiple medical problems. Memorial services will be 10:30 a.m. Friday, August 20, 2021, at the Altus City Cemetery under the direction of Kincannon Funeral Home and Cremation Service. Chuck was born April 7, 1941, to the late Wayne and Marie (Standridge) Stillwell of Copper Hill, Tennessee. He attended Bremen High School in Midlothian Illinois before entering the United States Air Force in 1959. His duty station included the 11th Maintenance Squadron, Altus Air Force Base, Strategic Air Command. He received an honorable discharge from the Air Force as an Airman 2nd Class. Following his military service, he went on to be an entrepreneur in many facets. Chuck graduated from Southwestern Oklahoma State University with a Bachelor's Degree in Engineering Technology. Chuck’s Christian faith was an essential part of his life. He began his journey in the ministry as an ordained Baptist Minister in 1975 and continued to work in that capacity for the rest of his life. Chuck was preceded in death by his devoted wife of 52 years, Kathryn “Sue” McCarty; and two siblings, James W. Stillwell (wife Dotte) and Wayne LaMar Stillwell. He is survived by his brother, Jerry L. Stillwell (wife Norma) of Caldwell, TX; two children, Kathryn Cryer (husband Sammy Jay) of Altus, OK, and Matthew Stillwell (wife DeAnna) of Yukon, OK; grandchildren, Chase Cryer of Altus, OK, Cassidy Cryer of Burleson, TX, and Jake and Ethan Stillwell of Yukon, OK; and two great-grandchildren, Blakeley and Brody Cryer-Soper. As a proud military veteran, Chuck will be fondly remembered as a loving husband, father, grandfather, uncle, brother and friend. Online tributes may be made at kincannonfuneralhome.com

The family of Charles Evans "Chuck" Stillwell created this Life Tributes page to make it easy to share your memories.

Send flowers to the Stillwell family.