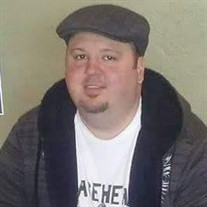 Craig William Chase, 38, of Altus, passed away Wednesday, June 26, 2019 in Oklahoma City, OK. Celebration of Life services, including the Oklahoma State Department of Corrections Honor Guard, have been scheduled for 10 a.m. Tuesday, July 9, 2019 with Barry James officiating. Services have been entrusted to Kincannon Funeral Home and Cremation Service. Craig was born December 8, 1980 to Gary and Rosemary (Kelly) Chase in Augsburg, Germany. He attended Altus High School and later took some college classes in California. Craig served his country in the United States Army, briefly, before being medically discharged. Craig married Michelle Kamp on February 14, 2002 in Vernon, Texas. He was a Correctional Officer at the Oklahoma State Reformatory in Granite, Oklahoma. Craig was an artist, and incorporated his artwork in a comic book which he produced. He also enjoyed hunting, outdoor target shooting, writing, playing piano and guitar and singing. Craig is preceded in death by his mother, Rosemary Chase. He is survived by his father, Gary Chase; his daughter, Trinity Madeline Chase; his son, Jaydin Chase; his brother, Cody Chase; and many friends and coworkers. Online tributes may be made at kincannonfuneralhome.com

The family of Craig W. Chase created this Life Tributes page to make it easy to share your memories.

Send flowers to the Chase family.