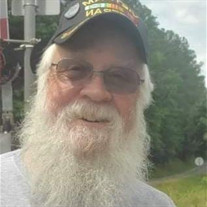 Dale Ralph Webster, 73, of Altus, passed away on September 10, 2021 at the Jackson County Memorial Hospital. Funeral services with military honors will be 10 AM Thursday, September 16, 2021 at the Kincannon Memorial Chapel with the Rev. Micah Welcher officiating. Cremation and services are under the care of the Kincannon Funeral Home and Cremation Service. Dale Ralph Webster was born on August 4, 1948 in Centralia, Washington to Lester and Dolores (Skvor) Webster. Dale attended Centralia High School in Centralia, Washington. He married Roberta (O’Toole) Webster on July 25, 1970 in Centralia, Washington. Dale joined the United States Air Force in 1967 where he honorably served for over 20 years. He retired on September 30, 1988 as a Master Sergeant. Dale was a proud Vietnam Veteran serving two separate tours from 1969 through 1972. He later attended Cameron University in Lawton, Oklahoma where he obtained his Bachelors Degree in Education, and continued his education at Southwestern Oklahoma State University in Weatherford, Oklahoma, where he obtained his Masters Degree in Education. Dale was a Principal and an Educator for many years, retiring in 2008. Dale was an active member of the Veterans of Foreign Wars, Lions Club, Operation Care, Western Prairie Good Sams Club, the Patriot Guard Riders, and the Tornado Alley Road Riders, where he served as the chapter president. Dale enjoyed traveling with Roberta across America, visiting all 50 states. He also enjoyed locating all of the Dairy Queens, wherever they were. Dale also enjoyed his M&M candies, especially the peanuts, which were his favorite. Those that knew Dale knew of his passion for Santa. Dale was the Santa that many children, adults, and pets knew to love. Dale would donate any money he received as Santa to veteran charities. Dale is survived by his wife, Roberta; two sons, Daniel Webster and Richard Webster; four sisters, Christine Kneeland, Kathy Trudgian, Pearl Pickett and June Kalista; one brother, Willie Smalley; three grandchildren, Jackson Webster, JoJo Webster and Benji Webster; his grandcat, Midas; and many friends. Dale was preceded in death by his parents and one brother, Calvin Smalley. The Webster family will greet friends from 6:00-8:00 PM Wednesday, September 15, 2021 at the Kincannon Funeral Home. In lieu of flowers, the family requests a donation be made to a veteran’s charity of your choice. Online tributes may be made at kincannonfuneralhome.com Please be aware that masks are required inside Kincannon Funeral Home.

Dale Ralph Webster, 73, of Altus, passed away on September 10, 2021 at the Jackson County Memorial Hospital. Funeral services with military honors will be 10 AM Thursday, September 16, 2021 at the Kincannon Memorial Chapel with the Rev. Micah... View Obituary & Service Information

The family of Dale Ralph Webster created this Life Tributes page to make it easy to share your memories.

Send flowers to the Webster family.