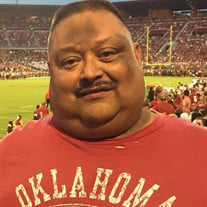 David Glenn Gallagher, 56, Altus, passed away on Sunday, August 9, 2020 in Oklahoma City, Oklahoma. Memorial services will be held at 10 a.m. Saturday, October 10, 2020 at the Altus City Cemetery with Rev. Greg Hawn officiating. Cremation services were entrusted to the Kincannon Funeral Home and Cremation Service. David was born June 29, 1964 to Frederick and Jean (Hawkins) Gallagher in Oklahoma City, Oklahoma. He and Katherine Rose Hilliard were united in marriage on February 10, 1993 in Vernon, Texas. David worked for the Coca Cola Bottling Company for twenty years and was currently an accounts manager. David loved playing baseball and softball. David “Hawk” Gallagher was a big man with a big personality and an even bigger heart. He never met a stranger and never forgot a friend. He loved God, family, and sports. If you knew David, you knew that he was an avid fan of the Bulldogs, the Sooners, and the Raiders. Even though we know he has passed on to a better place, we can’t help but wish that he had been able to see his grandsons grow up and have families of their own. Our family reunions won’t be the same without the late evening gathering around the smoker with him telling stories with his cousins and friends who dropped by to visit while he was cooking. We love him, we miss him, but we take comfort in knowing that his spirit is soaring free in Heaven. David is preceded in death by his brother, Patrick Gallagher. He leaves behind his wife, Katherine Rose Gallagher, of the home; two daughters, Victoria Jensen and husband, Jonathan, and Elizabeth Rose Gallagher; grandchildren, Alex and Jericho; parents, Jean and Fred Gallagher; brothers and sisters, JoAnn Fisher, Michael Gallagher, Timothy Gallagher and wife, Christy and Ted Gallagher and wife, Tamra; brother-in-law, Steve Hilliard and wife, Emma; father-in- law, Gene Hilliard and wife, Audrey Hilliard; and his mother-in-law, Gloria Hilliard. In addition to his immediate family, he will also be missed by his aunts and uncles, June & Gary Babb, Sarah & Tom Behling, Winnie & Danny Woods, Louise Marris, William Hawkins, a multitude of cousins, and many friends who have become members of our family. Online tributes may be made at kincannonfuneralhome.com

The family of David Glenn Gallagher created this Life Tributes page to make it easy to share your memories.

Send flowers to the Gallagher family.