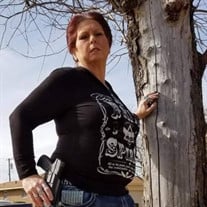 Deana Marie Heatherly, 55, of Altus, Oklahoma passed away at OU Medical Center in Oklahoma City on Thursday, June 9, 2022. Funeral services will be at 2:00 PM Tuesday, June 21, 2022 in the Kincannon Memorial Chapel with Rev. Brent Logan officiating. Viewing for the public will start Monday, June 20, 2022. Service and cremation are under the care of Kincannon Funeral Home and Cremation Service. Deana Marie Heatherly was born on August 27, 1966 in Napa, California to Otis Denton Williams and Jewel Ellen (Greathouse) Williams. She moved to Altus, Oklahoma in 1989. Deana married Brent Heatherly on October 8, 2005. She was a beloved mother and grandmother to her children and grandchildren. Deana loved camping and spending time with her family, especially her grandchildren. She enjoyed riding her motorcycle and referred to it as her “wind therapy”. Deana is preceded in death by her parents and a grandson, Patrick. Survivors include her husband, Brent Heatherly; daughter, Andrea Osborn and husband, Terry; son, John Edward Basden and wife, Tara; stepdaughter, Shari Lynn Heatherly; stepson, Jason Nathanial Heatherly; several grandchildren Alyxis, Rosellen, Deamon, Lillian, and Connor; a sister, Sherry Salinas and husband, Gonzalo; and many other nieces, nephews, other family and friends. Online tributes may be made at kincannonfuneralhome.com

The family of Deana Marie Heatherly created this Life Tributes page to make it easy to share your memories.

Deana Marie Heatherly, 55, of Altus, Oklahoma passed away at...

Send flowers to the Heatherly family.