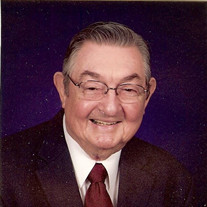 Donald Lee "Pod" Moran, 95, Altus, entered into rest Saturday, December 15, 2018 in Altus, Oklahoma. Funeral services will be 2 p.m. Tuesday, December 18, 2018 at the Tipton Church of Christ with Timmy White officiating. Burial will follow services at the Tipton Cemetery under the direction of Kincannon Funeral Home and Cremation Service. Donald Lee Moran was born October 4, 1923 in Tipton, Oklahoma to Thomas and Cora Ida (Trull) Moran. He graduated from Tipton High School in 1941 and was one of the first FFA members of the school. Donald was inducted into the U.S. Army, served three years during WWII in France, and was honorably discharged on November 15, 1945. He married Joyce Pickrell on November 25, 1945. He owned and operated Don's Beauty Supply in Dallas, Texas for 37 years. Joyce passed away in 2000 and Donald moved back to Southwest Oklahoma, marrying Imogene Burrows April 6, 2005. He enjoyed running his business, bookkeeping and golfing with business associates. Donald was a member of the Church of Christ in Tipton, Oklahoma. Donald was preceded in death by his parents; his first wife, Joyce; and a daughter-in-law, Judy Moran. Survivors include his wife, Imogene; daughter, Diane Byron and husband, Jerry; son, Donald J. Moran; special friend of the family, Marquita Landes; a host of grandchildren, great grandchildren, nieces, nephews and many friends. Memorial contributions may be made to the Altus Chapter 33 DAV, P.O. Box 482, Altus, Oklahoma 73522-0482. Online tributes may be made at kincannonfuneralhome.com

The family of Donald Lee Moran created this Life Tributes page to make it easy to share your memories.

Send flowers to the Moran family.