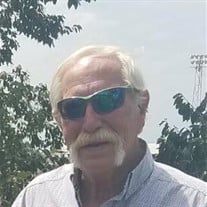 Donnie Shotts, 66, Fort Cobb Lake, Oklahoma, passed away at his home Wednesday, November 28, 2018 following a brief battle with cancer. A Celebration of Life service will be held at 11 a.m. Saturday, December 15, 2018 at the Kincannon Memorial Chapel with Brother Todd Pack officiating. Donnie Shotts was born December 23, 1951 in Altus, OK to James Alton Shotts and Augusta (Marteney) Shotts. Donnie was surrounded by his loving family when he earned his wings. Donnie began training horses and working with race horses at a very young age, as well as working with cattle. His dad started teaching him electrical work at the age of 12. After graduating Altus High School in 1970, he served in the US Navy. When he returned home, he met and married Linda Hunter. To that marriage three children were born. Donnie worked for the City of Altus electrical department while earning an associates degree in business management from WOSC. He then went to work for Public Service Company of Oklahoma as a Lineman. Donnie was united in marriage on July 15th, 2010 to Trenna Wright in Eureka Springs, AR. After retirement from PSO, he and his wife opened Ally Home Health. Donnie was such a loving man that absolutely adored his kids and grandkids. He was a hard worker, protector, and an amazing provider for his family. One of his favorite hobbies was to jump on his Harley, with his “beautiful wife” on back, and cruise wherever the road would take them. Donnie was a member of the Oney Baptist Church. He was preceded in death by his parents, James Alton Shotts and Augusta Shotts Blackmon, one brother, Tim Shotts, and one brother-in-law, Sonny Banister. Donnie is survived by his wife, Trenna Shotts of the home in Ft. Cobb, OK; children, Casey Shotts and his wife Sarah, Crystal Valles and her husband Richard, Chad Shotts and his wife Jennifer; Sunny Daniels, Kaci Faulkner and her husband Danny, Brandy Wright and her husband Wade, Colt Osburn, Ashton Claborn, and Weston Wright; grandchildren, Wesley Killian, Charlee Bodine, Summer Valles, Vivyan Valles, Sydney Shotts, Duncan Shotts, Garrett Shotts, Gage Shotts, and Gus Shotts, Damian, Skylar, Mathias, and Brineley Daniels, Avery Huckabay, Denton Dahlenburg, Hannah Firanski, Skyler , Kelley, and Samarah Faulkner, Rayli and Layni Wright, Gabriel Osburn, and Hadleigh Howell; sister, Debbie Banister, sister-in-law Kriste Smith, step sister, Linda Cartwright, as well as many nieces, nephews, other relatives and friends.

Donnie Shotts, 66, Fort Cobb Lake, Oklahoma, passed away at his home Wednesday, November 28, 2018 following a brief battle with cancer. A Celebration of Life service will be held at 11 a.m. Saturday, December 15, 2018 at the Kincannon Memorial... View Obituary & Service Information

The family of Donnie Shotts created this Life Tributes page to make it easy to share your memories.

Donnie Shotts, 66, Fort Cobb Lake, Oklahoma, passed away at his...

Send flowers to the Shotts family.