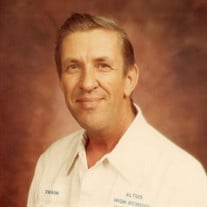 Dwain Lee Freed, 86, Altus, passed away Friday, March 11, 2022, at Jackson County Memorial Hospital. Funeral services will be held at 10 AM on Wednesday, March 16, 2022 in the Kincannon Memorial Chapel with Rev. Jason Duree officiating. Burial, with military honors, will follow services at the Altus City Cemetery under the direction of Kincannon Funeral Home and Cremation Services. The Freed family will greet friends Tuesday evening from 6 p.m. until 8 p.m. at the funeral home. Dwain was born October 19, 1935, to Pearlie and Mary Lola (Albright) Freed in Enid, Oklahoma. His father, Pearlie, passed away when Dwain was only 5 years of age. He got a newspaper route to help his mom and two brothers with supporting the family. He graduated from Anthony High School in Anthony, Kansas with the Class of 1953. He entered the United States Air Force in 1956 and married Myrtle ‘Alice’ Garrison on March 16, 1958 in Anthony, Kansas. He served in Vietnam from December of 1968 until October of 1969. His assignments included: Parks AFB, CA; Amarillo, TX AFB; Smokey Hill AFB, Salina, KS; Okinawa, Kadrena Naha AFB; England AFB, LA; Kirkland AFB, and retiring at Altus AFB in March of 1976. Dwain also worked as a custodian for Altus Public School from June 1976-1998. He served his Lord and Savior and was a Deacon at the Southside Baptist Church for many years. In retirement Dwain was also a People Greeter at Wal-Mart and will be missed by many. Dwain was preceded in death by his parents, Pearlie and Lola; his stepfather, Dave Barrow; his loving wife of 57 years, Alice; two brothers, Rolland and Robert Freed; and his sons-in-law, Dwain Welch and Les Lambert. He is survived by two daughters, Brenda Lee Welch and Mary Ann Lambert; his son, Douglas Leroy Freed; nine grandchildren, Carren Welch, Lisa Welch, Olivia Freed, Angela Freed, Takara Boughton (Montae), Tyler Martinez, Jennifer Umana (Chris), Erin Lambert and Terry (Suzanne) Gilbert; three great-grandchildren, Teigan, Braylon, and Taelynn; two sisters-in-law, Ann Freed and Janie Freed; and a host of other relatives and friends. The family will greet friends from 6:00 – 8:00 PM on Tuesday, March 15th at the funeral home. Online tributes may be made at kincannonfuneralhome.com. Memorial contributions may be made to the Southside Baptist Church, 1100 Asalee, Altus, OK. Thank you to Tamarack Assisted Living Center and JCMH 4th Floor staff and providers for your care.

The family of Dwain Lee Freed created this Life Tributes page to make it easy to share your memories.

Send flowers to the Freed family.