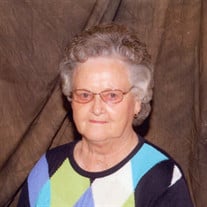 Laveta Knox, 89, Headrick, passed away Tuesday, January 18, 2022 at Magnolia Creek Nursing facility in Altus. Funeral services will be held at 2 p.m. Friday, January 21, 2022 at the Elm and Hudson Church of Christ. Burial will follow services at the Navajoe Cemetery under the direction of Kincannon Funeral Home and Cremation Service. Laveta was born February 15, 1932 in Headrick, Oklahoma to Joe and Ruby (Booker) McDearmon. She graduated Friendship High School with the Class of 1949 and later, continued her education at Altus Junior College. Laveta and Billie Knox were married April 15, 1949 in Headrick, Oklahoma. The couple were blessed with three children; Ted, Brenda and Kip. During the early years Laveta was a loving mother and homemaker while helping Bill out on the farm. Later, she worked for Drs. Wray and Conaster, who were local optometrists. She then kept books for a local tractor dealership until it changed ownership. Southwest Grain and Elevator hired her to keep books until it sold to the Clint Williams Peanut Company, where she served as office manager for 19 years until her retirement. Laveta was a longtime member of the Elm and Hudson Church of Christ; was active in the Friendship Alumni Association ; and served as Secretary-treasurer for the Navajoe Cemetery Association. In her spare time she enjoyed crochet, cross stitch, sewing and spending time with her grandchildren. Laveta was preceded in death by her parents; her husband, Billie; and her son-in-law, Don McCombs. She is survived by her children, Ted Knox; Brenda McCombs; and Kip Knox (Crystal); five grandchildren, Stephanie Angelly (Melvin), Heather Bonds (Neil), Kevin Knox (Karen), Tisha Knox and Kayla Knox; 11 great grandchildren; 2 great great grandchildren and many friends. A special heartfelt thanks from the Knox family to the Magnolia Skilled Nursing and Therapy staff for their loving care. Memorial contributions may be made to: The Tipton Children’s Home, 1000 Broadway, Tipton, Ok 73570 or the Navajoe Cemetery Association c/o Brenda Henry, 2501 Pawnee, Altus, Ok 73521

The family of E. Laveta Knox created this Life Tributes page to make it easy to share your memories.

Send flowers to the Knox family.