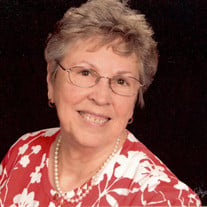 Eleanor L. Chesser Price, 76, Oklahoma City, passed away Thursday, October 22, 2020 at her niece’s home in Altus. A private family graveside will be held. Services are under the direction of Kincannon Funeral Home and Cremation Service. Eleanor LaVerne Chesser was born July 8, 1944 in Frederick, Oklahoma to C. E. and Minnie (Mitchell) Chesser. She graduated from Weaver High School (Frederick) in 1962 and continued her education at Rose State Junior College, earning an Associate of Science Degree. Eleanor and Burris C. Price were united in marriage on July 2, 1966 in Frederick, Oklahoma. She worked for several years as a Lab Tech at Integris Baptist Hospital in Oklahoma City, retiring in 2005. Eleanor was a longtime member of the Southern Hills Baptist Church in Oklahoma City and enjoyed shopping; but her greatest joy was visiting with family and friends. She was preceded in death by her parents, C. E. and Minnie Chesser; her husband, Burris Price; and her siblings, A. J. Chesser, Anita Pothorst, Charles Chesser, Alma Hayes and baby brother, Ralph Chesser. Eleanor is survived by her sisters, Ollie Price and Dorothy Stokes of Altus; her brothers, James Chesser and wife, Hope of Murphy, TX; Leon Chesser and wife, Dee of Ft Worth, TX; Billy Chesser and wife, Linda of Frederick, OK; her sister-in-law, Reba Knapp of New Castle, OK; a brother-in-law, Ken Hayes of Broken Arrow, OK; and a host of nieces and nephews whom she considered as her own children. Memorial contributions may be made to the Oklahoma Baptist Homes for Children @ bfok.org Online tributes may be made at kincannonfuneralhome.com

Eleanor L. Chesser Price, 76, Oklahoma City, passed away Thursday, October 22, 2020 at her niece&#8217;s home in Altus. A private family graveside will be held. Services are under the direction of Kincannon Funeral Home and Cremation Service.... View Obituary & Service Information

The family of Eleanor L. Chesser Price created this Life Tributes page to make it easy to share your memories.

Send flowers to the Price family.