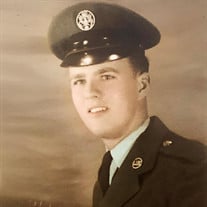 Ernest H. “Ernie” James, Jr. went to a better, pain free life on May 16, 2021. In heaven he has been reunited with his first wife, Connie James, who passed January 15, 1992. Ernie was born on April 6, 1939 in Pompton Lakes, New Jersey to Ernest H. James Sr. and Lenora Mae (Nix James). He graduated with the Class of 1957. Ernie and Connie were married on November 23, 1961. Together they had two children, Penny and Jimmy. Ernie served in the United States Air Force for 20 years. During his time in the service, he traveled all over the United Sates, Korea and Germany. After serving his country he retired in Altus, Oklahoma and purchased a small farm on the east side of Altus. Because of his love for the outdoors, he would have on his farm an array of animals; cows, pigs, horses, chickens, dogs, cats, donkeys, goats, and even a lama. After his Air Force retirement Ernie worked for the City of Altus for 20 years where he was very instrumental in planning and implementing “Christmas In The Park” which continues to this day. He volunteered for Operation Care for 14 years and up until the last few years Ernie was heavily involved with his church. He loved to sing praises to our Lord and every Sunday, you could find him in the choir singing or performing a solo. After Connie’s passing Ernie married Sandra Osburg on October 7, 1995. She remained his constant companion until his departure to heaven. They were together for over 25 years. Ernie left behind his wife, Sandra James, who took loving care of Ernie during his final years; children, Penny Raymond and finance, Scott Squires and Jimmy James and wife, Kayla James; grandchildren James Raymond and wife, Kadie, John Raymond, Taylor Barnhill and husband Taylor Roy, Emile James and Jace James; great grandchildren; River, Willow, June, Chase, Greyson and Colt. In lieu of flowers please make donations to: Operation C.A.R.E. Ministries 221 E. Walnut Street Altus, Oklahoma 73521 or Samaritan’s Purse P.O. Box 3000 Boone, NC 28607 Online tributes may be made at kincannonfuneralhome.com

The family of Ernest Harold "Ernie" James Jr. created this Life Tributes page to make it easy to share your memories.

Send flowers to the James family.