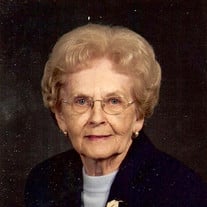 Ethelda Higgs, 95, formerly of Altus, passed away Tuesday, April 9, 2019 at Touchmark at Coffee Creek in Edmond, Oklahoma. Funeral services will be 10 a.m. Friday, April 12, 2019 at the Centennial Memorial Chapel in the Altus City Cemetery with Rev. Margie VanOostrum officiating. Burial will follow at the Altus City Cemetery under the direction of Kincannon Funeral Home and Cremation Service. Ethelda Higgs was born October 4, 1923 in Olustee, Oklahoma to Bill and Cecil (Motheral) Hestand. She grew up an only child on a farm near Harmony. She attended school at Harmony. As a young lady she accompanied her father to JC Penney's to sell eggs and fresh milk to the employees. It was there that she met Winston Higgs, her soon-to-be husband. They were married on August 2, 1944. They both became very active in the First Methodist Church in Altus where they made their home. While Winston served in WWII, Ethelda stayed behind and worked for the telephone company; saving each paycheck so when he returned home they could buy a house. They settled in Altus where they had 2 sons; Larry Wayne and Gary Eugene. She later owned a beauty supply. Ethelda was very involved in the Women's Circle at the church. She also supported Winston in all of his many civic, religious and charitable organizations. Winston had the distinction of serving as District Governor of Rotary and Ethelda was with him every step of the way. They traveled to meetings all over the state of Oklahoma. Together they owned a finance company, furniture store and the beauty supply and salon. They were very active in church and the community and remained in Altus for their entire marriage of 69 years. Her hobbies over the years included playing dominoes with friends and family and traveling in a 5th wheel. One of her biggest joys was "digging in the dirt." She loved to be outside with her plants and flowers. She enjoyed animals and had a succession of Boston Terriers. Etheldea was preceded in death by her husband, Winston, and her parents WL "Bill" and Cecil Hestand. She is survived by her sons, Larry and wife, Kappy, of Sapulpa, OK; and Gary and wife, Gayle, of Oklahoma City, OK; six grandchildren, Steve and wife, Dorothy, of Denver, CO; Kevin and wife, Jennifer, of Oklahoma City, OK; Ryan and wife, Miranda, of Kansas City, MO; Kyle and wife, Jacki, of Houston, TX; Kristi and husband, Brian Morton, of Edmond, OK; and Ryan Matthias of Sapulpa, OK. She is also the proud great grandmother to Ethan, Callie, Camyrn, Boston, Jake, Anna, Julia, Allyson, Braxton, Houston, Claire and Blake. Memorial contributions may be made to the Western Oklahoma State College @ 580-477-2000 or the First United Methodist Church @ 580-482-0795. The Higgs family will greet friends from 6pm to 8pm Thursday evening at Kincannon Funeral Home. Online tributes may be made at kincannonfuneralhome.com

Ethelda Higgs, 95, formerly of Altus, passed away Tuesday, April 9, 2019 at Touchmark at Coffee Creek in Edmond, Oklahoma. Funeral services will be 10 a.m. Friday, April 12, 2019 at the Centennial Memorial Chapel in the Altus City Cemetery with... View Obituary & Service Information

The family of Ethelda W. Higgs created this Life Tributes page to make it easy to share your memories.

Send flowers to the Higgs family.