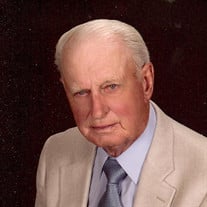 Francis “Pat” Hunter, 91, passed away at his home in Altus on Monday, October 12, 2020. Graveside services have been scheduled for 1:00 PM, Thursday, October 15, 2020 at the Tipton Cemetery under the direction of Kincannon Funeral Home and Cremation Service. Francis Patrick Hunter was born on March 17, 1929 to Samuel C. and Margaret (Maple) Hunter in Salineville, Ohio. Pat attended school in Salem, Ohio and earned his GED after entering the Air Force. He attended classes at Western Oklahoma State College attended numerous military and professional schools. Pat and Koelle Jones were united in marriage on May 23, 1959 in the First United Methodist Church in Altus, OK. Pat served his country and retired as a Major after twenty three years. While in the military he received many commendations and medals. After his retirement, he was the Vice President of the Government Division for B&D Supply in Phoenix, AZ. Pat enjoyed reading, doing puzzles, hunting, farming, playing golf and treasure hunting. He was of the Catholic faith. Pat is preceded in death by his parents, brother, Jim Hunter, and sister, Peggy Wolfe. He leaves behind his wife, Koelle; a daughter, Kathleen K. Marshall; a son, BG (Retired) Rodney “Kim” Hunter; four grandchildren, Patrick Marshall, Hunter Marshall, Meredith Marshall and Aaren Hunter Landry; two great-grandchildren, Amberlea K. Landry and Phoenix Ealy; and a sister, Jean Snow. Online tributes may be made at kincannonfuneralhome.com

The family of Francis Patrick "Pat" Hunter created this Life Tributes page to make it easy to share your memories.

Send flowers to the Hunter family.