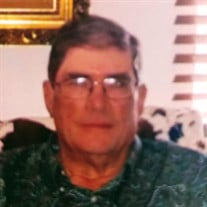 Fred Wayne Davis, 73, Blair, passed away on Wednesday, August 26, 2020 in Oklahoma City, Oklahoma. Graveside services have been scheduled for 11:00AM Saturday, August 29, 2020 in the Blair Cemetery with Rev. Tyler McDowell officiating. Services are under the direction of the Kincannon Funeral Home and Cremation Service. Fred was born on January 6, 1947 to Scott and Betty (Gaines) Davis in Granite, Oklahoma. He grew up in City View and graduated from Blair High School with the Class of 1965. Fred and Wanda Grice were united in marriage on January 28, 1967 in Memphis, Texas. He served his country in the United States Army from 1967 to 1970 and was a veteran of the Vietnam War. He farmed all of his life and raised and raced greyhounds for over thirty years. Fred was a life time member of the VFW and the American Legion. His parents preceded him in death. Fred leaves behind his wife, Wanda; daughter, Marcia Brooks and husband, Todd; son, Greg Davis; four grandchildren, Jasmyn, Meghan and Kasen Davis, and Connor Brooks; a sister, Saundra Burrow and husband, Dwight; sister-in-law, Joyce Minnick and husband, Dean; brother-in-law, Jimmy Grice and wife, Debbie; as well as many other family members and friends. The Davis family will greet friends from 5:30 pm to 7:30 pm at the Kincannon Gathering Room. Memorial donations may be made to the Postmaster, Blair Cemetery Association, Blair, Oklahoma 73526 or drop off at the People’s State Bank in Blair. Online tributes may be made at kincannonfuneralhome.com

The family of Fred Wayne Davis created this Life Tributes page to make it easy to share your memories.

Send flowers to the Davis family.