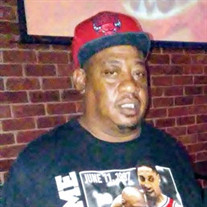 *********Services are scheduled as planned********** Gary Wayne Goodlow, 52, Altus, passed away on Sunday, January 23, 2022 at the Jackson County Memorial Hospital. A homegoing celebration will be 10:00 AM, Thursday, February 3, 2022 at the Kincannon Memorial Chapel with Marvin McGee officiating. Burial will follow in the Altus City Cemetery under the direction of the Kincannon Funeral Home and Cremation Service. Gary Wayne Goodlow was born on February 17, 1969 in Altus to Henry Goodlow and Dorothy Allison. He grew up in Altus and attended Altus Public Schools. He was a cook for the Altus Club at Altus Air Force Base for almost 20 years. Gary married Gloria Maytubbie in Altus on February 21, 1998. He enjoyed working on cars, barbequing and spending time with his family, especially his grandchildren. His father preceded him in death. Survivors include his wife, Gloria, of the home; a son, Cedric Maytubbie; a daughter, Jasmine Maytubbie; 7 grandchildren, Liyah, Zaiden, Cerenity, JoJo, Kaiden, Kenzlie, and Kennadi; his mother, Dorothy McDuffie; a brother, James Goodlow; three sisters, Regina McGhee and husband, Marvin, Shelly Goodlow, and Tasha Sonia; and many other family members and friends including a special cousin, Nick Burris; three special nephews, Dre, Charles, and Greg; and two special friends, Willie Williams, Jr. and Daryl Naff. Online tributes may be made to kincannonfuneralhome.com

The family of Gary Wayne Goodlow created this Life Tributes page to make it easy to share your memories.

Send flowers to the Goodlow family.