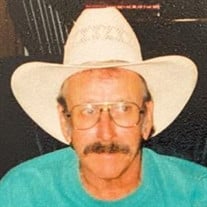 Gary Lee “Kink” Randolph, 81, Eldorado, passed away Monday evening at Jackson County Memorial Hospital. Graveside services will be held at 2:00 PM Saturday, February 12, 2022 at the Eldorado Cemetery with Rev. Ricky Crouch officiating under the direction of Kincannon Funeral Home and Cremation Service. Kink was born January 2, 1941 in Blythe, California to Fred and Jewell (Geers) Randolph. He attended the Eldorado School and graduated with the Class of 1959. Early on he cowboyed on ranches around Eldorado and feedlots in Texas, then began trucking, hauling mostly cattle for the rest of his adult life. If there was one thing he liked doing, it was driving his truck and hauling cattle. Kink was of the Methodist faith and enjoyed cattle, horses, fishing and watching Westerns. He was a cowboy and truck driver at heart – through and through. His greatest love beyond his family was his dogs, especially Dixie. Kink was preceded in death by his parents, Fred and Jewell Randolph; two brothers, Freddie and Billy Randolph; and one sister, Rita George. He is survived by a daughter, Krystal Clark; four sons, Stacy Randolph, Toby Randolph, B.J. Randolph, and Cody Randolph and partner, April; one stepson, Acy James; eight grandchildren, Dakota and Chance Clark, Sheyann Burkham, Ciarra Randolph, Katelyn Randolph, Jaylee Randolph, Courtney Randolph, and Dylan James; six great grandchildren, Levi Clark, Keythen and Kyler Kellison, Kenlee and Kailee Thomas, and Camdynn “Camo” Randolph; and many friends. Online tributes may be made at kincannonfuneralhome.com

The family of Gary Lee "Kink" Randolph created this Life Tributes page to make it easy to share your memories.

Send flowers to the Randolph family.