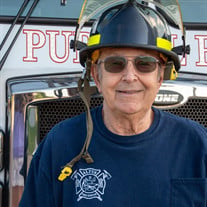 Gayland Lee Kellison, age 75, passed away on Saturday, November 6, 2021. A memorial service will be held at a later date. Arrangements are under the care of Kincannon Funeral Home and Cremation Service. Gayland Lee Kellison was born on September... View Obituary & Service Information

The family of Gayland Lee Kellison created this Life Tributes page to make it easy to share your memories.

Send flowers to the Kellison family.