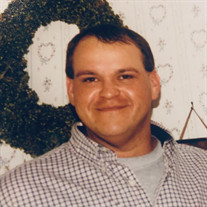 Gene Paul Wilmes, 44, Duke, passed away Sunday, March 17, 2019 at United Regional Hospital in Wichita Falls, Texas. Graveside services will be 10:30 a.m. Thursday morning, March 21, 2019 at the Victory Cemetery, West of Altus, with Chad Smith officiating. Services are under the direction of Kincannon Funeral Home and Cremation Service. Gene Paul Wilmes was born July 5, 1974 in Mescalero, New Mexico and was adopted as a two year old. He attended Altus Public Schools and graduated with the Class of 1993. Gene excelled in the Altus "Tidal Waves" swimming program as a youth; played football and baseball and showed livestock while in school. Gene continued his education at Clarendon Jr. College for 2 years; Southwest Technology Center in Altus and OSU in Stillwater. He worked most of his adult life farming and ranching with his family; was of the Christian faith; was a big OSU Cowboy fan; and enjoyed the outdoors while hunting quail. Gene Paul was preceded in death by his brother, Christopher Brandon Wilmes; grandfather, Windell Anderson and grandparents, Scotty and Pat Scoggin. He is survived by his parents, Paul and Linda (Scoggin) Anderson, and Greg Wilmes; two daughters, Kaydee Wilmes and Charlotte Wilmes; two sons, Jessie Winters and Drake Wilmes; two sisters, Melissa Everson and husband, Kyle; and Whitney Thompson and husband, Jason; his granddaughter, Caydance Winters; grandparents, Freda Anderson; and Paul and Joanne Wilmes; biological brother and sister, Lance and Charlotte; nieces, Tori Everson, Joelle Everson and Hallie Everson; nephews, Dal Everson and Hawk Thompson; Godparents, David and Tonya Walker; several aunts, uncles, and cousins from the Anderson families; the Scoggin families; the Wilmes families; the Kowena families and many, many friends whom he loved like family. "We will always be grateful to his biological mother, Rhoda, for her incredible gift to us, and to Larry and Susan Bradley and the late Judge Rodney Basil for their part in securing his placement." The family of Gene Paul Wilmes will greet friends at a reception from 6 to 8 p.m. Wednesday evening at Kincannon Funeral Home. Online tributes may be made at kincannonfuneralhome.com

The family of Gene Paul Wilmes created this Life Tributes page to make it easy to share your memories.

Send flowers to the Wilmes family.