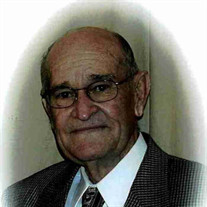 George “Corky” Mitchell, 93, Altus, passed away Wednesday, September 1, 2021 in Altus. Funeral services will be 10 a.m. Saturday, September 4, 2021 at the Elm and Hudson Church of Christ with Daniel Ingram officiating. Burial will follow services at the Altus Restlawn Cemetery under the direction of Kincannon Funeral Home and Cremation Service. George C. Mitchell, Jr. was born June 26, 1928 to George C. and Rosa (Scott) Mitchell in Eldorado, Oklahoma. He graduated from Eldorado High School with the Class of 1946 and enlisted in the U.S. Army November 21, 1950. He served his country during the Korean War as a construction engineer and was honorably discharged as a Sergeant First Class October 20, 1952. Corky continued his education at Murray State College and married Mary Hunter March 5, 1960 in Stillwater, Oklahoma. The couple made their home in Southwest Oklahoma where Corky turned his lifelong hobby of farming and ranching into a vocation. He was a lifelong member of the Church of Christ, serving as Elder at the Eldorado Church of Christ and was currently attending the Elm and Hudson Church of Christ. Corky was a member of the Eldorado Lions Club, the Eldorado Kiwanis Club and the Eldorado School Board. Corky loved to farm and spend time with his family and grandchildren. Corky was preceded in death by his parents; brother, Billy Mitchell; and two sisters, Oma Jones and Nadine Bryant. He is survived by his wife, Mary; son, George Mitchell, III and wife, Toye; three daughters, Rosemary Gipson and husband, Randy; Melissa Hall and husband, Rafe; Molly Lucas and husband, Greg; fourteen grandchildren, Whitney Palmer and husband, Taylor; Carson Mitchell and wife, Trinian; Chase and Trent Harvick; Terance Gipson; Hunter, Hogan and Corky Allison Hall; Alyssa, Emma and Brett Thompson; Dustin Lucas and wife, Sydney; Dylan Lucas and wife, Lisa; and Darren Lucas; four great grandchildren, Lucy and Lola Palmer; Tucker Jones; and Kaisley Lucas; many other family members and friends. In lieu of flowers memorials may be made to the Tipton Children's Home, P.O. Box 370, Tipton, Oklahoma 73570. Online tributes may be made at kincannonfuneralhome.com

The family of George "Corky" Mitchell created this Life Tributes page to make it easy to share your memories.

Send flowers to the Mitchell family.