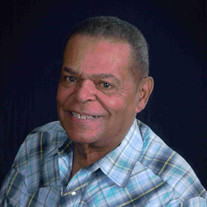 George “G.E.” Standard, 80, Blair, passed away on Thursday, November 25, 2021 at the Jackson County Memorial Hospital. A memorial service with military honors will be 2:00 PM Friday, December 3, 2021 at the Martha Road Baptist Church with Rev. Kevin Baker officiating. To watch the webcast of the Memorial Service go to https://martharoad.org/. Arrangements are under the direction of the Kincannon Funeral Home and Cremation Service. George was born on October 20, 1941 in Washington, D.C. to Walter Standard and Elizabeth Richburg. He grew up in D.C. and graduated high school from there. He enlisted in the United States Air Force for over 20 years and retired in 1979 as a Staff Sergeant. In the Air Force, George worked primarily as a jet engine mechanic. After his retirement, he worked for civil service at Altus Air Force Base as a mechanic for another 25 years, retiring in 2007. He was a member of the Martha Road Baptist Church and a lifetime member of the VFW Post #4876 where he served as a chaplain for many years. George enjoyed trains, tractors, and music and wherever he was at, Biscuits, was always at his side. His parents; his first wife of 20 years, Sarah (Rowley) Standard; a brother; and a sister, preceded him in death. Survivors include his son, George Standard; a daughter, Gwen Meeks; four grandchildren, Anthony, Colette, Emmerson, and Sarah; three great grandchildren, Lux, Dominic, and Janessa; two sisters, Vernita Coulliette and husband, Paul, and Veronica Flowers; his former wife and best friend, Naomi Zawicki; and his loyal companion, Biscuits. In lieu of flowers, memorial contributions may be made in his name to the Martha Road Baptist Church at martharoad.org or to 20388 E. CR 158, Altus, OK 73521. Online tributes may be made at kincannonfuneralhome.com

The family of George "G.E." Standard created this Life Tributes page to make it easy to share your memories.

Send flowers to the Standard family.