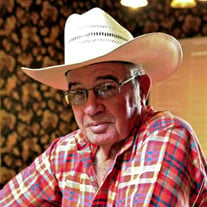 George Harold Terry, 85, Mangum, passed away in Altus on Tuesday, March 23, 2021. Graveside services will be held at 2 p.m. Tuesday, April 6, 2021 at the Mangum Riverside Cemetery with Billy Clabaugh officiating. The family will greet friends Monday evening from 6 p.m. to 8 p.m. at Kincannon Funeral Home in Altus. Services are under the direction of Kincannon Funeral Home and Cremation Service in Altus. George was born on February 28, 1936 in Elk City, Oklahoma, the son of George Washington and Vera Florene (Milton) Terry. He was raised in Greer County, Oklahoma and graduated from Reed High School in 1954. He married Margaret 'Jo' Moss, his wife of 66 years, on October 28, 1954 in Mangum, Oklahoma. George and Jo made their home in Reed and later outside of Mangum. He raised cattle, cotton, wheat, hay and a loving family. He was, truly, a servant of God, spending over 40 years as a deacon and then elder of the Mangum Church of Christ and later serving however he could as a devoted member of the Sayre Church of Christ. He was also on the board of the Reed Water Corporation from its inception in 1969 until his death, and he was very active as an agent and later a delegate for American Farmers & Ranchers. George was a quiet and wise man who loved all, especially children. He loved his grandchildren greatly and enjoyed all the time he got to spend with them. And he was very taken with his new great granddaughter. It brightened his day to receive pictures or videos of her. He was never known to utter a curse word or lose his temper. He was not one to push his views or opinions on others but was ready to offer help to any who asked. He hated to borrow anything but would loan anything he had to neighbors, friends or strangers. He will be missed by all who knew him, but we are sure that God took him into his loving arms and told him to rest from a race well run. He is survived by his wife, Jo, of the home; son and daughter-in-law, Randel and Sharon of Lubbock, TX; daughter-in-law, Leesa of Lawrence, KS; five grandchildren, Sommer of Oklahoma City, OK, Keegan of San Antonio, TX, Russell (Brenna) and great granddaughter Harper of Wichita Falls, TX, Allison of Chicago, IL and Austin of Lubbock, TX; brother, Howard (Carol Anne) of Altus, OK; and many nieces, nephews, cousins and friends. He is preceded in death by his parents, George and Vera, and sons, Fred and Robert. Memorial contributions may be made to the Quartz Mountain Christian Camp, 14696 N 2080 Road, Lone Wolf, OK 73655, the Tipton Children’s Home, 1000 N Broadway Ave, Tipton, OK 73570 or to the charity of the donor’s choice. Online tributes may be made at kincannonfuneralhome.com.

The family of George H. Terry created this Life Tributes page to make it easy to share your memories.

George Harold Terry, 85, Mangum, passed away in Altus on Tuesday,...

Send flowers to the Terry family.