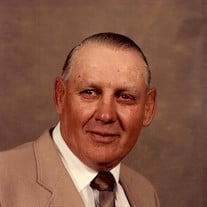 George "Bill" Weyrick, 87, Duke, passed away Thursday, December 13, 2018 at Jackson County Memorial Hospital. Funeral services will be 2 p.m. Monday, December 17, 2018 at the Duke First Baptist Church with Rev. Keith Gillham officiating. Burial will follow services at the Prairie Hill Cemetery under the direction of Kincannon Funeral Home and Cremation Service. George William (Bill) Weyrick was born July 6, 1931 at Prairie Hill, Oklahoma to Elmer Charles (Charley) and Grace (Carlton) Weyrick. he graduated from Duke school in 1949 and married Zeta Joan Wilson later that year on August 10th. They shared a lifetime of 69 years together. Bill and Zeta engaged in farming and ranching and resided on the Weyrick homestead, where Bill's grandfather, Dan Weyrick, brought his family when he moved them from Atchison, Kansas to Indian Territory in January of 1902. Bill was known for his love of the land and enjoyed driving the tractor, harvesting wheat, raising cattle, and being outdoors. He and his brother-in-law, R.B. Masters of Duke, Oklahoma engaged in custom harvesting several years, traveling to northern states. His wife, Zeta, and sister, Betty Masters, helped feed the harvest crew and had many adventures along the way. Bill also took great pleasure in studying the bible and teaching the Men's Bible Class at First Baptist church, Duke, where he served as a deacon. Going camping, fishing at Texoma, and taking his family and friends to the mountains in Colorado and New Mexico were highlights of his summers. Bill was preceded in death by his parents; an infant brother, Elmer Charles, Jr; and a sister, Betty Ruth Weyrick Masters. He is survived by his wife, Zeta, of the home; four children, Bryan Weyrick and wife, Brenda of Duke, Oklahoma; Judy Belew of Moore, Oklahoma; Gay Meason and husband, David of Duke, Oklahoma; and Cindy Weyrick of Altus, Oklahoma. His grandchildren and great-grandchildren include Kristi Lynn Smith and daughters, Arianna and Ausha, of Yukon, Oklahoma; Brett Weyrick of Kingfisher, Oklahoma; John and Elaine Weyrick and daughter, Rain, and son, Carter, of Calumet, Oklahoma; Christopher Scott Belew, Moore, Oklahoma; and Lindsey Dollins and her husband, Charlie and children, Braden and Braylee of Duke, Oklahoma. The Weyrick family will greet friends from 2 to 4 p.m. Sunday at the funeral home. Online tributes may be made at kincannonfuneralhome.com

The family of George William Weyrick created this Life Tributes page to make it easy to share your memories.

Send flowers to the Weyrick family.