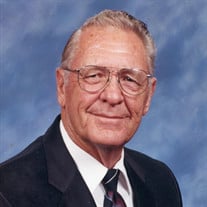 Glen Ovid Biddy, 88, of Altus, Oklahoma passed away on Tuesday, February 22, 2022 at the VA Medical Center in Lawton. Services will be at 10:00 AM on Saturday, February 26, 2022 at the Kincannon Memorial Chapel with family stories being shared. Burial will follow at the Warren Cemetery under the direction of Kincannon Funeral Home and Cremation Service. Glen was born in Warren, Oklahoma on November 27, 1933 to Lester Ovid and Ila Opal (Collins) Biddy. He attended Blair School and graduated with the Class of 1952. Glen served in the United States Army from February 1954 to December 1955 and married Cleta Jones on September 1, 1956 in Blair. He graduated with a Bachelor of Education from Oklahoma State University in 1959 and began his career as an ag teacher in Broxton, Oklahoma. Glen and his family moved back to the Warren area in 1965 where Glen started the ag program at Navajo High School. The family then moved to Corn, Oklahoma where Glen taught ag classes at Washita Heights High School. In 1978 Glen became the OSU Extension director in Hollis and then, in 1980, taught the Vocational Industrial Clubs of America class as well, retiring from teaching in 1986. Glen then worked for the U.S.D.A. in the Altus area for 10 years, from 1986 until 1996. He was a member of the Elm & Hudson Church of Christ; enjoyed fishing, going to garage sales, RV camping and tinkering. He was preceded in death by his loving wife of 63 years, Cleta; and parents, Lester and Opal. Glen is survived by his son, Steve Biddy; daughters, Connie Barnes and Tammy Beaty; five grandchildren, Brandy Vermillion and husband, Shane; Brady Biddy and wife, Lacy; Kristina Snyder and husband, Brent; Cody Barnes and Macy Biddy; 12 great grandchildren; his sister, Idell Culberson and husband, Gayle; his sister-in-law, Brenda Schultz and husband, Al; and many friends. Online tributes may be made at kincannonfuneralhome.com

Glen Ovid Biddy, 88, of Altus, Oklahoma passed away on Tuesday, February 22, 2022 at the VA Medical Center in Lawton. Services will be at 10:00 AM on Saturday, February 26, 2022 at the Kincannon Memorial Chapel with family stories being shared.... View Obituary & Service Information

The family of Glen Ovid Biddy created this Life Tributes page to make it easy to share your memories.

Glen Ovid Biddy, 88, of Altus, Oklahoma passed away on Tuesday,...

Send flowers to the Biddy family.