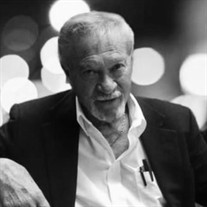 Glen O. Myers, 80, Altus, passed away on Saturday, April 23, 2022 at the Jackson County Memorial Hospital. A memorial service will be at 1:00 PM Saturday, April 30, 2022 at the Kincannon Memorial Chapel with John Lingle officiating. Arrangements are under the care of the Kincannon Funeral Home and Cremation Service. Glen was born on April 16, 1942 in Belmond, Iowa to Kenneth and Nellie (Wirtz) Myers. He grew up in Alexander and graduated high school from there in 1959. Glen served two years in the US Army and was honorably discharged as a Specialist. He started his career in sales in Arizona and then moved to Altus, Oklahoma where he would eventually call home. Glen sold cars and was a mechanic for a number of years with his brother at Kae Myers Mazda from 1972-1988. During that time, he spent many Saturday nights at the racetrack as the flag man. He then co-owned ABC Pawn from 1989 to 1992. Glen was a jack of all trades and enjoyed “wheelin and dealin.” Glen worked selling and transporting wholesale cars as well as auctioneering and then retired after working at Badger Oil Company. Glen was a member of On Mission, enjoyed going to the casino, trap shooting and working on the ranch with Doc. He was an avid collector of firearms, jewelry, and old cars. His most cherished times were spent being around his family or at his “office” at the Friendship Inn. His parents; two brothers, Larry and Kent Myers; sister-in-law, Margaret Myers; and special friends, Les Lambert and Bill Ray, preceded him in death. Survivors include six children, Robert West, Jeff Myers and wife, Lisa, Andy Jones, Kevin Myers and wife, Corrina, Krystal Swiatek and husband, Ryan, and Justin Myers and wife, Elizabeth; his grandchildren including, Dylan Myers and wife, Tife, McKenzi Brandan and husband, Pierce, Mason Myers, Taylor Clement, Sidney Clement, and the West grandchildren; his great grandchildren, Blake, Isla, and Palmer; two brothers, Kae Myers and Lon Myers and wife, Margie; a sister-in-law, Roz Myers; nephews, Neil Myers and Allan Myers; nieces, Julie Myers and Kristi Myers; special friends, Dr. Charles Carter, Warren Bomboy, John and Leslie Lingle, Carl Bitz, Terry Bradford and Brent Romines; and many other beloved family members and friends. As Glen would always say, “Don’t let the truth get in the way of a good story.” In lieu of flowers, memorial contributions may be made in Glen’s name to On Mission, 221 W. Walnut, Altus, OK 73521. Online tributes may be made at kincannonfuneralhome.com

The family of Glen O. Myers created this Life Tributes page to make it easy to share your memories.

Send flowers to the Myers family.